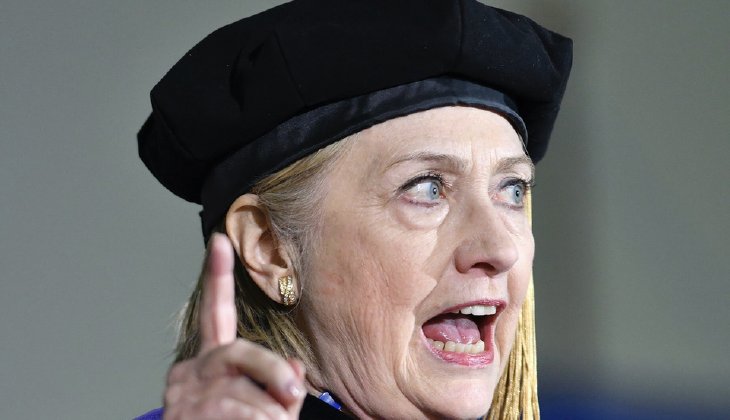 Non-stop grand-standing and finger-pointing could doom the former First Lady's third presidential bid before it even begins.

Is Hillary Clinton on the verge of a meltdown?

On the heels of reports that many Democrats aren’t exactly thrilled with the idea of her running for president again, the former First Lady last week launched a bizarre attack on the Democratic National Committee, suggesting that it had sabotaged her 2016 campaign by failing to set up a top-notch data operation to help her identify and track key voter groups, especially in the swing states.

Clinton claimed that the DNC data operation was so “inept” and “underfunded,” that she had to contribute her own campaign money “just to keep it going.”

It’s only the latest excuse that Clinton has invented to try to explain how she got beaten last fall. And it’s left top Democrats who helped direct the 2016 campaign apoplectic.

“Fucking bullshit,” is how Andrew Therriault, the former director of DNC data operations, reacted in a profanity-laced tweet after learning of Clinton’s comments.

Therriault says that there was plenty of data available showing that none of the key Rust Belt States Clinton ended up losing, including Pennsylvania and Michigan were “safe.”  Clinton’s campaign simply ignored the data on the assumption that they knew the landscape better, he argues.

The former First Lady’s comments come after news reports have circulated that many Democrats are growing leery of her recent efforts to declare herself the leader of the “resistance” to Trump’s presidency.

In a press conference several weeks ago, Clinton described her plans to gin up grassroots protest against Trump domestic and foreign policies.  Many analysts also saw it as a transparent attempt to boost her prospects for yet another bid for the Democratic Party nomination in 2020.

Clinton, though widely criticized for two disastrous White House bids in 2008 and 2006, seems desperate to get back in the political game – by any means necessary.

Back in February, her allies floated the idea that she might run for Mayor of New York.  The current Democratic mayor, Bill De Blasio, was seen as facing tough re-election prospects due to a corruption scandal.

But a poll taken among New Yorkers found overwhelming opposition to the idea.

Therriault has deleted his angry tweets about Clinton but other Democrats close to the DNC have begun weighing in.

In an interview with the Hill newspaper, Tom Bonier, the CEO of TargetSmart, a data firm that works with many Democratic clients, defended the DNC’s 2016 efforts as “the most robust data operation the DNC has ever seen.”

Bonier also noted in a series of tweets that, “the Clinton team was using DNC data throughout the primary. If it was that bad, they knew that for two years but did nothing.”

Others have noted that the DNC data operation helped power Democrats to a razor-thin victory in the governor’s race in North Carolina last November.

Much of the DNC’s data operation traces its root to Barack Obama’s two successful presidential campaigns.  Obama pioneered methods of organizing campaign volunteers and of identifying voter niches by election district that vastly overshadowed the GOP’s own field operation.

Clinton was supposed to have inherited  these methods and some of the personnel that proved so instrumental to Obama.  Any many Democrats hoped that inheritance would allow Clinton to overcome the kind of clunky and disorganized field operations that doomed her own campaign in 2008.

But party insiders say that it was hard to teach the old Clinton dog new Obama tricks.

The data are merely the “raw ingredients,” argues John Hanger a Democratic campaign consultant.  “[It’s] the chef that decides what to do with them.”

And the chef, Clinton’s campaign team, was simply not up to the job, party insiders say.

Few Democratic officials seem willing to speak out publicly against a third Clinton bid for the presidency. But Clinton’s comments and her public demeanor are beginning to raise eyebrows.

During her recent Wellesley commencement address, Clinton broke into a prolonged coughing fit much like previous ones that have raised concerns about the state of her health and her ability to survive the stresses of the presidency were she to be elected.

And just as baffling was her dress.  Wearing a black beret, Clinton seemed to be channeling the ghost of Monica Lewinsky, the former white House intern whose affair with Bill Clinton led to his impeachment in the House, and which tarnished  the campaign of his chosen successor, Al Gore.

Lewinsky was notorious for wearing a nearly identical black beret during her many appearances at campaign events where she often hugged the former president.

Clinton, of course, once famously dismissed Lewinsky as a “narcissistic loony-toon.”

But some of Clinton’s angry and disappointed critics  – who’ve grown tired of her incessant grandstanding and finger-pointing – are beginning to saying much the same about her.

“Good God, what is she thinking,” said one senior Democrat in response the the uproar over her latest remarks.

Clinton may be sensing that her political career is rapidly drawing to a close.

And rather than exit gracefully, she’s looking for new people to blame — including the very party that bent over backwards to help her.