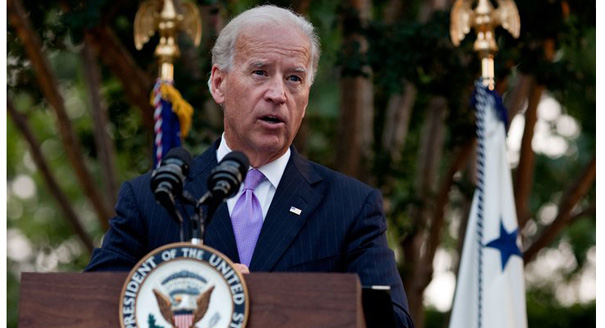 Former Vice-President Joe Biden encourages arts and technology leaders to assist in finding a cure for cancer at the SXSW Festival.

Ever since Donald Trump pulled the biggest upset in US political history, and quite frankly even before that, the divide among Democrats and Republicans, progressives and conservatives, has escalated into a civil war of words, and threatens to stop any sort of progress in getting anything through Congress.

Republicans have the majority in both houses and the presidency and are determined to press the buttons that resonated throughout Trump’s campaign which swept many new congressmen into office as well.  Democrats are just as determined, perhaps even more so, to prevent the opposition from doing anything at all, it sometimes seems.

But this weekend, there was a little ray of light that shone through the clouds of darkness surrounding the capital, and it came out of Austin, Texas.  The South by Southwest Festival, an annual gathering of leaders and innovators from the technology and art sectors, was held, and the keynote speaker of the event was no less than former Vice-President Joe Biden.

But Biden didn’t focus his remarks on his former Commander-In-Chief’s replacement, but rather on an issue that surely both parties can agree, finding a cure for the dreaded disease of cancer.  Biden was the leader of the White House Moonshot Task Force, whose mission was to work with a wide array of executive departments within the government to foster clinical research, therapy development, and other cancer-related issues, while serving in his former positon.

But Biden was more than just a figurehead, being touched by the disease when his son, Beau Biden, succumbed to brain cancer at the young age of 46 in May of 2015.

Calling the fight against cancer “the only bipartisan thing left in America,” Biden addressed the group in hopes of stimulating “some of the most creative minds in the world” to work together and share research to combat the disease and develop new and innovative treatments.

Biden pointed out the most of the funding from cancer research comes from the US government, and specifically cited the 21st Century Cures Act, legislation passed last December that committed $1.8 billion in funds to cancer research over the next seven years.

Although Biden chose not to run for president in the 2016 primaries, he commented at the festival he would have liked to have been the nation’s leader when the end of cancer as we know it was found.  He also said he hoped the new administration would be able to “focus on being as committed and enthusiastic as we were to the goal.”

We should commend Vice-President Biden for his dedication to finding a cure, and encourage President Trump to follow Biden’s lead and pledge to support the fight against cancer, which claims over 500,000 Americans each year.  More than 1.5 million new cases are expected to be diagnosed this year.

Surely this is the kind of bipartisan government involvement that everyone can get behind.