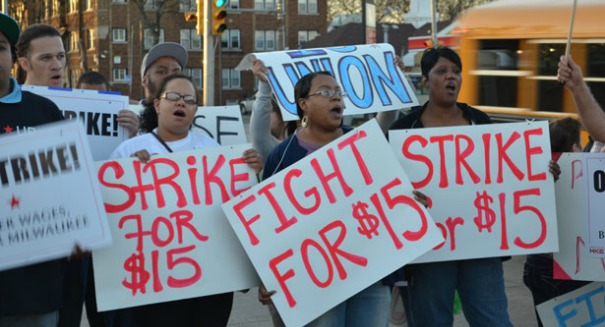 Minimum wage increases don't usually have the desired impact for most low-wage earners.

Chicago’s O’Hare airport is about to get hit with an employee strike, as workers are demanding an increase in the area’s minimum wage to $15 an hour, and according to some sources, workers at McDonald’s restaurants and graduate teachers across America plan to join in as well.

Insert government in the place of rich capitalists in the statement above and you have the same thing with regard to public employees.  There is the notion that that there is a pot of gold at the end of the rainbow and all the government has to do is grab a handful and pass it along.

In the real world, the $15 per hour minimum wage has to be reconciled with the current business model, whether private industry or government agency.  That means the additional $12,000+ expense to the company per employee per year, required to bring their working wage from $9 to $15, must be absorbed somewhere.  Not to mention additional expenses and other taxes paid on behalf of the employees.

The net effect is the low-wage earners are in the same position as before, with little disposable income.  They are bringing home more money in their paychecks, if they still have one, but the cost of living has risen to take away their extra cash.