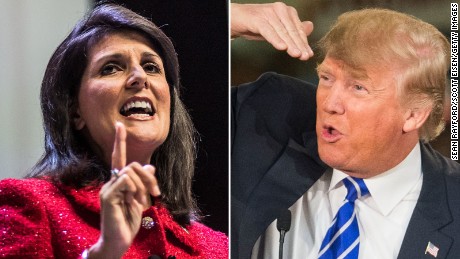 Donald Trump says he doesn’t approve of “identity” politics – the idea of privileging a person’s ethnicity or gender as a criterion for political appointment.

But how much identity politics was involved in his decision to nominate South Carolina governor Nikki Haley as our nation’s next U.N. ambassador?

Quite a lot, it would seem.

To be sure, Haley is well-liked in GOP elite circles. She’s rightly earned kudos — and not just from Republicans — for her diplomatic handling of the Confederate flag controversy.  But aside from traveling overseas to develop trade deals for her state, she has no special qualifications to represent America in a world forum.

Of course, Hillary Clinton had no real qualifications to become President Obama’s Secretary of State, either.  She’d traveled to world capitals with husband Bill as First Lady.  She’d represented New York, a global city.  But that was it.  Obama, who didn’t have real qualifications for his own job, anointed Clinton as part of a deal to resolve the outcome of the 2008 Democratic primary race.

And apparently the world loved the idea.

The world may come to love Haley, too.  She’s what liberals like to call a “woman of color” in a party that is still criticized for its lack of diversity.  Moreover, Trump’s been under fire for naming personal loyalists and policy iconoclasts to top posts at Justice, CIA and the National Security Council – all of them older white men.

Perhaps the world needs reassurance that Trump is prepared to operate within more traditional bounds.  And so does the liberal media.  So, there’s little doubt that the nomination of Haley, a one-time Tea Party insurgent who opposed Trump’s candidacy for months, is useful in an “optical” sense.

Haley’s also Indian-American, an ethnic immigrant group that Republicans have been eyeing for several years now as a possible counterweight to Democratic dominance of African-Americans and Hispanics.  While comprising no more than 3 million people, their influence far outweighs their numbers.  For one thing, they are the country’s richest Asian sub-group with average incomes (roughly $90,000) nearly twice the national level ($49,000).  They are mainly doctors, lawyers and entrepreneurs, with privileged visa status, and special access to federal small business loans.

They also have a propensity to open their wallets. Not only Haley but fellow Indian-American governor Bobby Jindal of Louisiana has benefitted mightily from their largesse.  Currently, Indian-Americans still tilt Democratic by a 2-1 margin, far less than Hispanics, but broadly in keeping with other Asian-American groups.  But that could well change with Haley’s ascension, one of the less obvious sub-texts to her recent nomination.

That sub-text may also have a powerful global twist.  Just last year, the Obama administration made a big push to recognize India as a major strategic bulwark in Asia against the influence of China, Muslim Pakistan and ISIS.  The recently elected Indian president, Narendra Modi, a Hindu nationalist who was once barred from entering the US because of his alleged involvement in anti-Muslim pogroms, was warmly welcomed by President Obama at the White House.

And Indian immigrants, who are heavily involved in politics in their native land and maintain ongoing transnational family and financial ties, are watching these developments closely.  Many are just as proud of Modi, who represents a distinct break with India’s quasi-socialist past and an embrace of Republican-style conservatism, as they are of Haley.

After Modi visited Obama, he also stopped in New York, where Indian-Americans of both parties turned out in record numbers at Madison Square Garden and treated him to a hero’s welcome

None of this rising Indian-American sentiment was lost on the Trump campaign, which undoubtedly views Modi and the Indian-American community as future strategic allies, too.  Trump spoke at a number of major fundraising events with Indian-Americans where he professed his love of the community and its culture.  It may not be known for months how Indian-Americans voted in November but it would come as no surprise to anyone if Trump performed better than any GOP candidate in recent memory.

Publicly, Haley still tends to play down her ancestry. She grew up in the South where Indian culture is virtually unheard of.  She’s also a Christian in a community whose members are mostly Hindu or secular.  And as a staunch conservative, she’s not a big fan of the kind of identity politics that liberals celebrate as part of their ideological creed.

But she may well benefit from this politics just as Trump and his fledgling administration could on a number of levels — which the crafty real estate mogul probably realized all along.  Haley’s nomination sends a number of interesting political signals, and Democrats, who would love to have a Haley in their own party, will be hard-pressed not to confirm her.