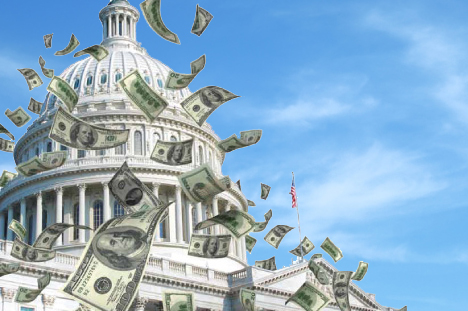 Democrats continue to outspend Republicans in elections and a controversial Supreme Court campaign finance ruling appears to have helped them, too.

It’s one of the biggest bugaboos in American politics today, and almost everything you know about it is wrong.

Actually, corporations have been recognized as individual legal entities for a long time in America – for at least 150 years, in fact.

And there’s no evidence that that they have increased their spending dramatically in recent election campaigns – far from it.

The Citizens United decision did say that a “corporate” body could not be denied the right to enter into “electioneering.”

But “corporate” body also includes trade unions, non-profit advocacy groups, and just about any other collective association that you can think of.

And so far, unions and other special interest groups have exploited Citizens United big-time.  In fact, it appears to be Democrats, not Republicans, who are benefiting the most so far.

Just look at the 2016 election.  Hillary Clinton rails against “unaccountable money” that is “corrupting our political system.”   She promises to be a champion of campaign finance reform.  Right?

But according to the non-partisan Center for Public integrity, which won the 2014 Pulitzer Prize, it just isn’t so.

Clinton has relied on huge donations from corporations, unions and nonprofits – all of them bankrolled by unknown donors.  They have already poured millions of dollars into a network of Clinton-boosting political organizations.

And that doesn’t include tens of millions of dollars she’s received from an elite club of Democratic “mega-donors,” including billionaires George Soros and Haim Saban.

Clinton has also actively encouraged Wall Street banks to get involved in influencing future elections, according to speeches and emails that have recently come to light.   These revelations completely contradict her public stance on the issue.

What about billionaire real estate mogul Donald Trump?  It turns out that his campaign’s donation profile looks a lot like Barack Obama’s in 2008 or Bernie Sanders; in 2016.  He’s relying almost exclusively on small donations from about 2.6 million people, shattering all past GOP records on this score.

In fact, Clinton is outspending Trump by a factor of 4-1, and maybe 10-1 in some key swing states.  And she’s trying to raise even more money from big corporate donors, according to the latest press reports.

The money-in-politics trend long predates Citizens United, of course.  Despite efforts to pass campaign finance reform, American elections have been awash in money for years.

What Citizens United did was to allow contributions previously funneled through independent issue organizations to go directly to political candidates and their campaigns– and to do so right up to the elections.

In theory, that could allow big money Fortune 500 donors to increase their election influence.  But thus far, the data suggests that it hasn’t.  Overall, campaign financing has increased since passage of Citizens United, but it’s been a relatively modest increase.

Some donors that liberals have worried about are staying the sidelines in 2016 – or focusing elsewhere.  Remember the infamous Koch Brothers, the Kansas-based oil barons?  They have refused to support Trump and are focusing on helping Republicans retain control of the Senate.

Why all the hype about Citizens United?  Because it’s a great scare tactic.   Each election cycle, Democrats can send out a ream fundraising letters warning of a pending corporate “takeover” of politics.   And the donations start pouring in.

It also fits the Democratic meme that the party represents the little people — rather than being the tweedle-dee to the GOP’s tweedle-dum of an elite-dominated system far removed from the daily lives of ordinary citizens.

When asked what he thought of the extravagant claims made about Citizens United, Ira Glasser, former head of the ACLU declared flatly:  “It’s a liberal delusion.”

But it’s also an enduring one.  Bernie Sanders, who just penned an op-ed for the Los Angeles Times calling on his supporters to hold their noses and back Clinton, warned about the consequences of allowing Trump to win.

And one of those consequences?  The use of Citizens United to open the “floodgates” of corporate election financing, he said.

Who knows, maybe Fortune 500 companies will eventually figure out how to use Citizens United to maximize their election influence still further.