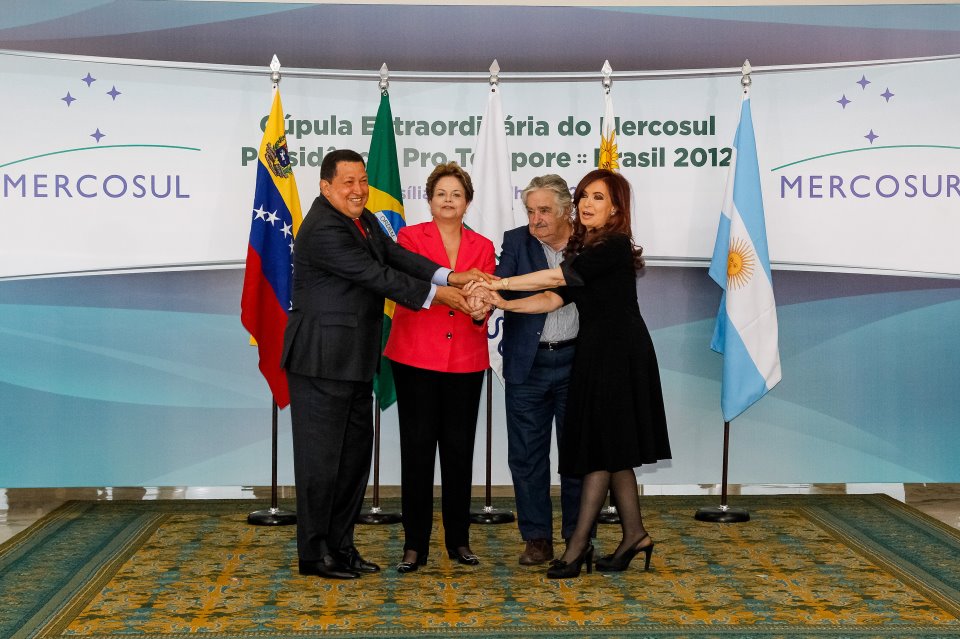 Mercosur is at a political impasse. Argentina, Brazil, and Paraguay refused to recognize Venezuela presidency of the bloc, based on the failure of the Caracas Government in complying with Mercosur trade tariffs and in protecting human rights. Uruguay, the only member still partially siding with Venezuela, has managed to grant Nicolas Maduro’s executive an extended deadline, 1st December 2016, to comply with the bloc’s requirements. In the meantime, Mercosur is swinging between acephaly and a collegial presidency by the remaining members, and Venezuela is becoming increasingly isolated inside the same organization where, during Hugo Chavez’s Government, it used to have a primary role.

But there is more going on in the Mercosur than bickering over the Presidency.

Long gone are the days when Néstor Kirkner, Hugo Chavez, and Lula da Silva challenged the Free Trade Area of the Americas and demanded a different attitude of the United States toward Latin America.
In fact, it was a mere 11 years ago, in 2005, and for a few years it seemed that they paved the way for others to follow. Bolivia and Ecuador elected left-wing Presidents, Evo Morales and Rafael Correa, in the next two years. Paraguay followed suite with Fernando Lugo, and when both Lula and Kirchner reached the end of their mandates, they were replaced by fellow party-member Dilma Rousseff and Cristina Kirchner, respectively.

In parallel, Mercosur expanded, accepted Venezuela as full Member, started the access procedure with Bolivia and included Ecuador and Colombia as Associates. Less than four years ago, Cristina Kirchner, Dilma Rousseff, and Hugo Chavez discussed the possibility of a further enlargement.

Fast forward to September 2016: Argentina has elected a conservative entrepreneur/President, Lugo has been suspended and then replaced by Horacio Cartes, a millionaire and questionable member of the Coloured Party. Hugo Chavez is dead, and his successor, Nicolas Maduro, has lost control of the country, now on the verge of collapse. Dilma Rousseff’s has been removed from office after a foggy impeachment procedure and replaced by Michel Temer, right-wing and fiscal conservative. Correa has announced he won’t run in the upcoming Ecuadorian elections, and Bolivians have denied Morales a chance to run a third time in 2019 by rejecting the Presidential referendum at the beginning of 2016.

Let’s be clear; Venezuela is a tinderbox, and Maduro is no saint. But it is undeniable that, in the current political alignment of Mercosur, Venezuela is an anomaly that other players, in primis Argentina and Brazil, have an interest isolating. Macri and Temer might be paladins of human rights or claim to be, but their attempt of secluding Maduro is also functional to the reshaping of the bloc they wish to push forward.
Both firmly oriented toward conservative economic policies, they have expressed their willingness to change the face of Mercosur, and address it toward a more economic (and less politic) union, and reduce its constraints regarding commercial agreements with third parties.
It is not only a shift from left to right that has happened. The Presidents of the majority of the members of Mercosur have decided to abdicate to the project their predecessors had tried to implement during their mandates. They are depriving Mercosur of all its ideological goals, and its objective of shaping something more than a union based on economic interests. While politically close, Macri and Temer do not share the ambition of Kirchner and Lula of creating an organization of states associated by a similar overview of politics, economy and social issues.

And Venezuela it is the last standing country from that Mercosur of the past they strive to change.
Also, should Maduro’s Government eventually fall, and a more right-oriented party take over the country, Brazil and Argentina might secure a strong ally inside the Mercosur itself, and proceed all together toward its reform.
Nor Macri nor Temer have anything to gain by the current status of Venezuelan politics, and it is their underlying interest in overthrowing Maduro’s Government that makes their claims of defending human rights dubious.
Both Argentina and Brazil have longer term plan for the area than just protecting Venezuelans and guarantee the respect of the Mercosur chart. Too bad they are pursuing their objectives by trying to empty what could have been (and might have been, for a short period), a union with an eye not only on business but also on ideology.