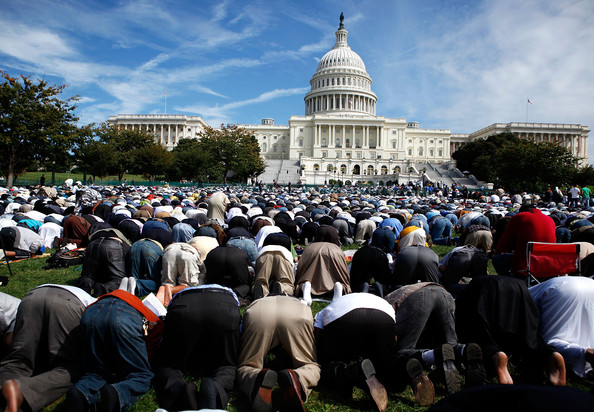 A fast-growing but volatile voting constituency confronts an unusually stark choice in 2016.

Thanks to Donald Trump – and to a spate of high-profile terrorist attacks on U.S. soil — Muslims in America have become a highly mobilized voting constituency in 2016. But with just 2.5 million eligible voters – and just 1.2 million registered – you might not think their influence would amount to all that much.

But it turns out that the bulk of Muslim voters are concentrated in just thirty congressional districts in Michigan, Ohio, Pennsylvania, Virginia and Florida – states that are among the most important “toss-up” contests in the battle for the White House and the Senate.

And in the slice-and-dice competition for “niche” voters that frequently defines the modern political campaign even a razor-thin demographic like Muslims could have a significant impact on the election, depending on their voting preference and turn out.

Historically, Muslims, despite their relatively small size, have proven to be a highly volatile and unpredictable voting constituency – more of a “swing” vote than a true voting “bloc.”

For years they voted overwhelmingly for Democratic Party candidates, especially in national elections. But in 2000, they swung sharply behind George W. Bush and the GOP, only to swing sharply away from Republicans after the American invasion of Iraq.

But rather than swinging squarely back to the Democrats, until recently they appeared to be in flux, which only heightens their potential significance.

Normally, without a galvanizing issue, experts say, barely half of Muslim registered voters typically bother to vote at all. But give Muslims a cause to rally around – like being targeted by Trump – and that figure can shoot up to 65-70 per cent.

A turnout on that level could easily translate into tens of thousands of additional Muslim voters in House and Senate races that are sometimes decided by a relative handful. It could also help swing a battleground state like Florida, where Muslims comprise an estimated 180,000 voters.

The unpredictability of the Muslim swing vote has been apparent in recent years. In 2004, polls conducted by the Council on American-Islamic Relations (CAIR) found that only 44 per cent of Muslims supported George W. Bush, compared to the 72 per cent that had supported him just 4 years earlier. But notwithstanding the Patriot Act, the invasion of Iraq and the global war on terror, some 30 percent of Muslims still refused to align themselves firmly with either party.

In some respects, the Muslim vote is almost as complex as the Latino vote, with divisions based on nationality as well as nativity. There are three distinct groups: South Asian Muslims, primarily Pakistani immigrants; Arab Americans, about 30 per cent of whom identify as Muslims; and a large group of African-Americans who have become converts to Islam.

Overall, Muslims tend to be young, relatively well-educated, upwardly mobile, pro-family, and highly religious voters – in other words, they generally look like Republicans even if they don’t overwhelmingly vote that way.

Bush, apparently, was one of the few American presidents to consolidate the Muslim vote decisively. His call for a return to “traditional family values” and his embrace of “compassionate” conservatism struck an especially responsive chord during his first term in office.  He also won support by vowing to provide special tax credits to private schools, including religious schools, at a time when Muslims were beginning to build more mosques and educational centers for their children.

Under Obama, the picture has remained surprisingly muddled.  Muslims initially cheered the president’s promise of a new American attitude toward the Muslim world.  But Obama, in deference to mainstream voters, long refused to visit mosques or even to meet with Muslim leaders.

He also sharply escalated an increasingly unpopular war in Afghanistan and did little to bring peace to the Middle East, all the while leaving the Bush-era domestic surveillance apparatus largely in place. As a result, many Muslims haven’t flocked to Obama.

Still, thanks to Trump, some Democrats believe Muslim voters are ripe to be picked in 2016. And Clinton’s doing her best to exploit that opening.  She’s created state-level directors dedicated specifically to Muslim outreach.  And pro-Democratic Muslim organizations have set a goal of registering one million new voters in an effort to defeat Trump.

Even so, don’t expect Muslims to vote as a monolith. Many have the same concerns as the general voter over the state of the U.S. economy and national security and counter-terrorism preparedness.  And Clinton is closely associated, even more than Obama, with the State of Israel, whose government most Arab Muslims instinctively view with suspicion.

In 2016, more Muslims will cast ballots than ever before. But whether they’ll emerge as a more stable and reliable pro-Democratic constituency remains to be seen.