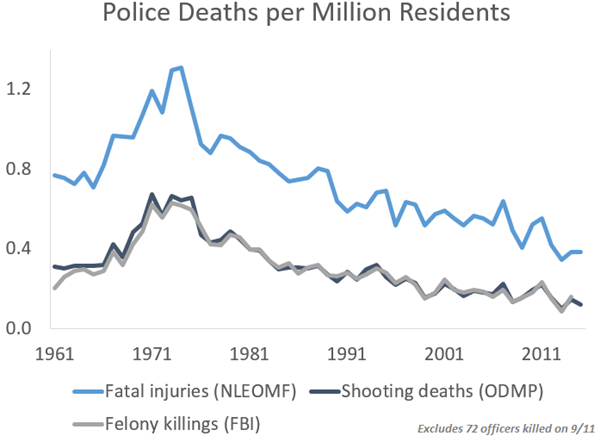 Following the tragic and horrible events in Dallas last week, it is important to grieve and to take stock of what led to that fateful evening that ended with five police officers killed. But it’s also worth taking a step back and putting the problems and threats the police face today into perspective. The sniper […]

Following the tragic and horrible events in Dallas last week, it is important to grieve and to take stock of what led to that fateful evening that ended with five police officers killed. But it’s also worth taking a step back and putting the problems and threats the police face today into perspective.

The sniper attack on Dallas police on July 7 was unquestionably one of the worst days for American police since 9/11. More officers were killed in one city that day than are typically killed across the whole country in a month. But as terrible as this event was, it also shows just how rare deliberate killings of police are.

Police Are Safer than Ever

Attacks on police have been in a long and steep decline for decades, and policing in general has never been safer. Data from the Federal Bureau of Investigation (FBI), the National Law Enforcement Officers Memorial Fund (NLEOMF), and the Officer Down Memorial Page (ODMP) confirm a large and significant drop in fatal injuries, from all causes, as well as shooting deaths and felony murders of police officers. 2015 was the third safest year for cops since the 1800s. The FBI hasn’t released data for 2015 yet, but the ODMP, which tracks nearly all line-of-duty officer deaths, reported just 39 non-accidental police deaths from gunfire in 2015 — the third-fewest since the 1800s.

Moreover, cops are not just dying less frequently — better medical care and bulletproof vests might explain that — they are also being attacked less frequently.

Assaults and injuries on police have declined precipitously. Since 1992, when attacks on cops peaked, the percentage of cops assaulted each year has fallen by 50 percent. The rate of injury fell by 60 percent, through 2014. Cops are almost 8 times less likely to be injured by guns today. Cops are also being shot at less than ever. According to the FBI, from 1992 to 2014, assaults on police involving firearms fell by 63 percent. At the same time, the rate of police injuries from assaults with firearms fell by an astounding 86 percent. Why This Is Important

Availability bias distorts our view of probability.Why do I think it’s important to emphasize the true (and declining) danger of police work, even at sensitive and tragic times like this? Perhaps, especially at times like this? It’s because I perfectly understand why cops feel like they are under siege and constantly in mortal jeopardy — it’s not just propaganda about a “war on cops.” It’s real threats combined with availability bias: every cop knows someone, or knows someone who knows someone, who has been killed on the job.

It’s easy and natural for police to mentally inflate the threats they face on a daily basis — and cops really are routinely assaulted and injured by suspects. Even in 2014, one of the safest years for police on record, 9 percent of officers reported being assaulted, and 2.5 percent were injured by suspects — and that’s every year. At least a couple thousand cops are assaulted with knives or firearms. Cumulatively, being a cop is likely to give you quite a few violent and scary memories. All it takes is a few vivid, terrifying incidents to prime people to confuse a hand falling to natural waist height with a suspect reaching for a weapon.

Being a cop provides plenty of violent and scary encounters.Consider, just 13 months ago, Dallas PD headquarters was sprayed with bullets, riddling the lobby, desks, and cars, while pipe bombs were planted around the parking lot. Remarkably, nobody died but the suspect (who was eventually killed by police snipers). But consider how on edge you would be if your office was shot up and nearly blown up, and then a year later, snipers from hidden locations gun down a dozen coworkers — and, in between these events, you stand a realistic chance of being assaulted on the job.

People who pretend that cops don’t have a difficult job are kidding themselves. They certainly do. But that is why it is even more important to see the threats clearly and put them in proper perspective. These high-profile killings not only do not justify the “war on cops” meme, they make it even more irresponsible to go around exaggerating the dangers of police work. Just as it is irresponsible to exaggerate the threats posed to citizens by bad cops, it is similarly dangerous to inflate the threats posed to cops from their citizens. Exaggerated fears poison the relationship that is supposed to be about protecting citizens and serving the public.

With the Dallas shootings all over the news, now more than ever, police will see threats everywhere and fear for their lives. It’s important for us and for them to know that the risks they face today are the same as they were last week and last year — and indeed much, much rarer than they were ten, twenty, or forty years ago. Police are not at war. We don’t need more militarization to solve this problem; we need more understanding.

David Bier is a policy expert in Washington, DC, and the editor of FEE.org. He writes on issues relating to science, civil liberties, and economic freedom.