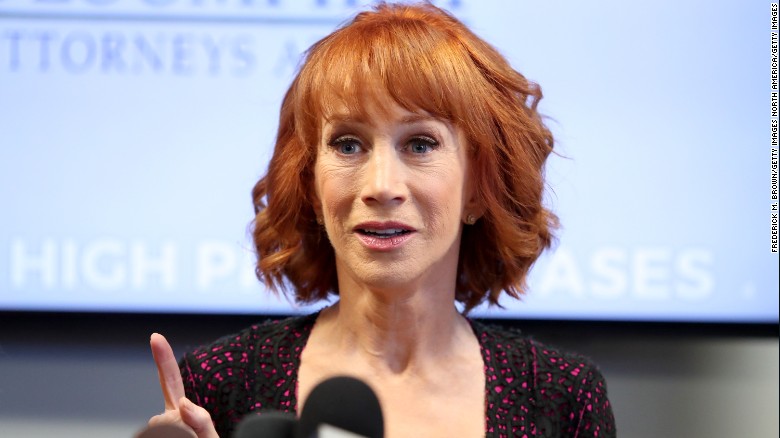 Kathy Griffin holds press conference to announce the president is out to get her. PHOTO CREDIT: CNN

Comedienne Kathy Griffin, who has come under fire from all sides for posting a photo of the bloody severed head of President Trump, announced in a press conference earlier today that Trump and his family are “using their power to target her,” according to a CNN report.

In other words, the Trumps had the audacity to use their celebrity status to respond to an attack against them by Ms. Griffin who (clearing throat) used her celebrity status to attack them.  I’m sorry, this isn’t a laughing matter, but that was about the funniest thing I have heard all day, and one of the few funny things I have ever heard from Ms. Griffin.

And to pile on, Griffin’s attorney, Lisa Bloom, with a straight face said, “As a result of the first family bullying her, she has been vilified, getting death threats, fired from multiple jobs and had multiple events canceled.”

No, actually, she was vilified, received death threats, and was fired from multiple jobs for posting a vile and disgusting photo of the severed head off a sitting US President.  And she would have been if the Trump family had not responded at all.

Bloom continued, “Kathy never imagined it could be misinterpreted as a threat of violence against Trump. That was never what she intended.” Cue the guffaws again.

Earlier this week, she begged for forgiveness, admitted she was wrong and that she went too far with the posting.  Now, all her troubles are suddenly due to the Trump family’s hostilities, and she says she plans to continue to make fun of Trump in future appearances, assuming there will be future appearances on her calendar.

She mentioned she had been contacted by the Secret Service.  Yeah, carrying around a severed head that resembles the president just might get you a call from them.  I wouldn’t have been all that surprised.

Griffin commented in reference to her claim about Trump personally trying to ruin her life, “What’s happening to me has never happened in this great country.”  One could argue her earlier post would have fallen into that category as well.

Finally, the CNN report continued to say that as a result of the controversy, Griffin has lost her endorsement with Squatty Potty, a line of bathroom footstools.