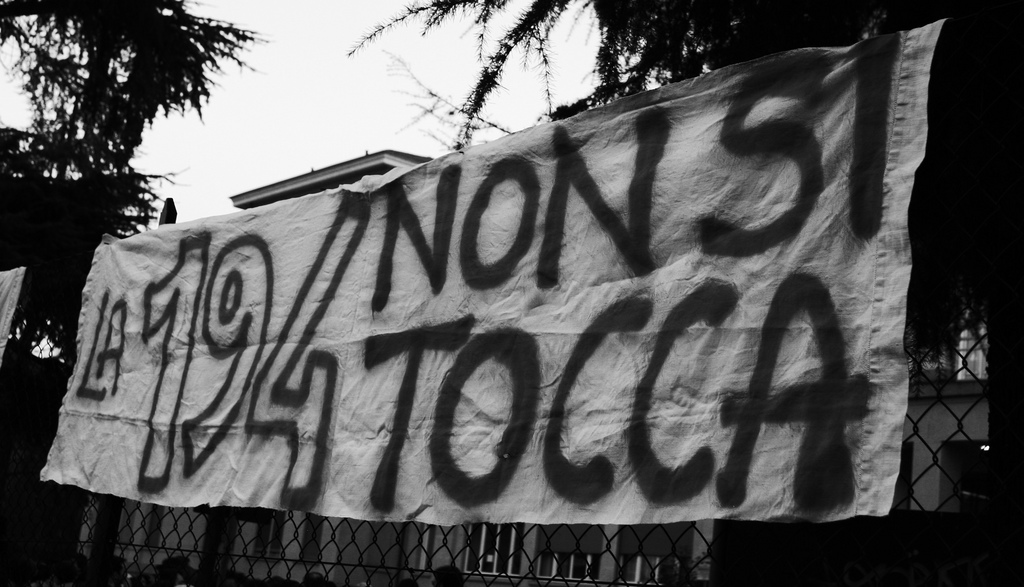 Italy has on paper a liberal abortion law. Yet, in practice it is becoming more and more complicated for women to terminate their pregnancy, and the number of illegal abortions is reportedly increasing. Religious beliefs and political weakness when it comes to defending this constitutional right of women are keeping Italy in the Dark Ages of reproductive rights.

Theoretically, a woman in Italy can decide to have an abortion – IVG, spontaneous interruption of pregnancy- within the first three months of pregnancy. After that term, abortion is allowed solely if the mother’s life is at risk, and upon medical request.

But Italy is also a Catholic country, hence, the same law that allowed abortions, the law 194 passed in 1978, also allows doctors and nurses to refuse the surgery if it goes against their religious beliefs.

It is all good on paper, but the reality is dramatically different.
In many regions, less than 10% of the gynecologists working in both private and public hospitals perform abortions. Two of the most flexible regions, Toscana and Emilia Romagna, traditionally left-oriented, still have half of their medical personnel refusing to help women who decide to have an IVG. In some hospitals, all the doctors are “conscientious objectors.” 35% of the clinics are “structure objectors,” meaning that the whole structure is composed of medical personnel against abortion.

And the percentage of these physicians – but also anesthesiologists and nurses- is steadily increasing for the last ten years, to such an extent that, in some part of Italy, it almost invalidates the right to abortion.

And who pays the price for this abuse of this constitutional right? Women, of course, and the poorest and more vulnerable more than others.

Many are forced to move to another region or another country, and those who cannot, to continue with a pregnancy they do not want or to resort to illegal centers for abortion. The number of IVGs has, in fact, diminished during the last five years, but many NGOs report that this decrease in raw numbers is due to the rise of underground clinics. And the EU too has voiced the same concerns and reprimanded Italy already twice.

The first time, upon request of Planned Parenthood Europe, for the number of objectors, which, according to the Union should have been regulated or compensated by the presence of non-objectors colleagues in every structure. Of course, when 93% of gynecologists is objector, like in the small region of Molise, is impossible to have for each of them (or for each structure they work on) an in loco substitute. Hence, abortions are performed only on selected days, when performed at all, and the few doctors available for the procedure forced to overwork to compensate for their objectors peers.

More recently, in 2016, following a report by CGIL (the Italian left oriented Workers Union), the EU has stated that considering the urgency of the procedure, in some cases, women looking for an abortion might be forced to go to alternative structures, in Italy or abroad. Or they have to terminate their pregnancy without the support and monitoring of the competent medical authorities, with grave dangers for the safety and well-being of the concerned women. Alternatively, they can be dissuaded, by sheer force of refusal after refusals, from having the abortion, hence basically denied the access to their basic right to terminate their pregnancy.

But why so many doctors decide to become objectors? It is not only a matter of religious beliefs. Some Catholic gynecologists still perform abortions, despite their personal moral values, and I cheer for them for choosing their professional role above their own beliefs. There are other reasons behind the rise of objectors. One, also mentioned by Gomorra’s author Roberto Saviano, is the predominant number of religious medical structures. Many public hospitals would not survive without the financial help of the Church, and a vast number of clinics are church-owned completely. Hence, the recruitment process favors doctors who share, or declare to share, the same values of their employers. Considering that objecting to abortion comes for free, meaning that there is no economic disadvantage, many aspiring gynecologists just adhere to the moral of their perspective employers.

And then, there is stigma and harassment. Yes, harassment also exists in the hospital corridors, sadly, where objectors doctors bully their non-objectors colleagues. Who, by the way, are also often penalized in their careers, should they encounter an anti-abortion superior.

There is no easy fix to the problem. There are, however, examples from other countries. In the UK, for instance, where almost 50% of the doctors are anti-abortion, objectors use to find by themselves a suitable replacement when asked to terminate a pregnancy. In other countries, those who do not perform abortions are economically penalized compared to their colleagues. Another solution, but difficult to implement due to the poor finances of the Italian medical system, would be to ensure that each structure has at least one non-objector per shift. My favorite one, even thought the most radical (or maybe because it is the most radical) is the Swedish approach: doctors who object to performing abortions are invited to choose a different medical path.

I am no legislator, hence I cannot decide the route to go. But as a woman, it is my right to demand whichever Government rules my home country, to take it out of this Dark Age it is dwelling into.