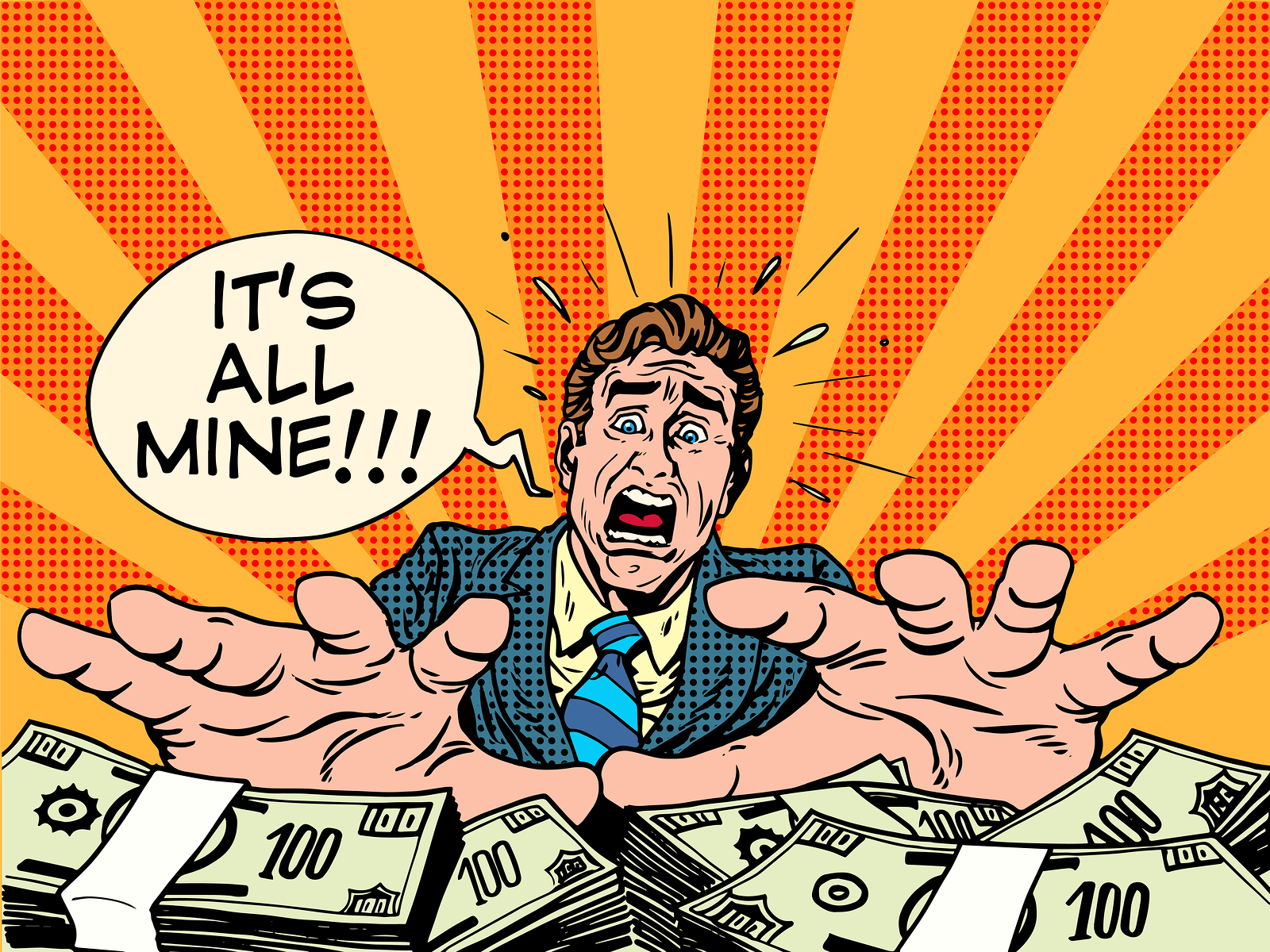 How can we get better availability of life-saving products?

As Editor-in-Chief of this publication, I make the conscious choice to publish articles from “all angles”, which means, by definition, I will disagree with many. So when Tom Friedl approached and asked if he could write a “scathing counter-argument” to the Jay Stooksberry article blaming Government regulation for the high price of EpiPens, my answer was consistent with our editorial approach: “Have at it”, to which I added “that being said, don’t be surprised if I write a counter to yours”.

Tom published his piece yesterday, and it is scathing, but not really a counter argument as much as ignoring the argument. Mr. Friedl explains his life is dependent on having access to a Mylan-equivalent product, so we can understand his passion for the problem. I am certainly regretful he has to endure this burden, but grateful such a product can exist easily and accessibly.

So let’s recap both sides.

The Stooksberry thesis is, summarized, thus:

Tom’s reaction to the Stooksberry arguments were thus:

I don’t have the freedom to choose whether or not to buy an EpiPen. I do or I die. The point that people are making is that healthcare shouldn’t be a matter of cost in the first place. Those who argue against Mylan’s behavior are upset because they feel that a company is being allowed to put a price on their right to live, something they didn’t choose to have to deal with. If you want a real free market, please acknowledge that they deserve that basic right, free of charge.

So nowhere in the Stooksberry piece is the argument that “a company is allowed to put a price on their right to live”, but rather that the FDA and cronyism prevent entrants from innovating, which would result in better product choices and lower prices. Competitors disrupt and dethrone those when regulations don’t thwart the process.

But Tom enters the argument of, rephrased, “I need it, therefore it should be provided to me as a basic right for free”. This of course ignores the notion of how goods arrive in the world of scarcity. We need food to survive too. And clean water. And shelter. And there are only so many raw materials on the planet. Plus we’d like other things like iphones and TV sets and transportation and education. How do we choose the raw materials? And what about the labor required to deliver these products? Consumers should have what they need! But how are these goods and services to be created?

Tom claims he is entitled to that labor for free because he requires it. Are we all entitled to the farmer’s labor for food? To the doctor’s labor when we require surgery? To reason “yes” is to validate the right to enslave your fellow man. This is the crux of the morality of capitalism. Who owns the right to one’s labor? The capitalist answer is unequivocally self-ownership. You may not legitimately hold a gun to another man’s head and say “give me what I require”; that is theft. You can, of course, offer him or her something in voluntary trade, which he/she is free to reject.

Typically the arguments against capitalism (which is based on the voluntary actions of humans, whether as suppliers or consumers) ignores how goods are and aren’t produced. Prices are information that inform us what to consume, what to produce, what fields of endeavor to pursue and which to ignore. High prices attract competitors and innovation. Low prices do not. Government interference with this process distorts the information, substituting political control for freedom of choice. The elites should pick what we do and don’t have, and those who disagree will be damned.

On the practical side, Tom’s plea of “I’ll die without it” is the reason why he should prefer Capitalism to any alternative. Because empirically, where there is more economic freedom, choices are greater and prices lower, because suppliers have reasons to supply. Where central planning is higher, choices are lower or non-existent. As a simple illustration in the US, Mark Perry offers this chart: 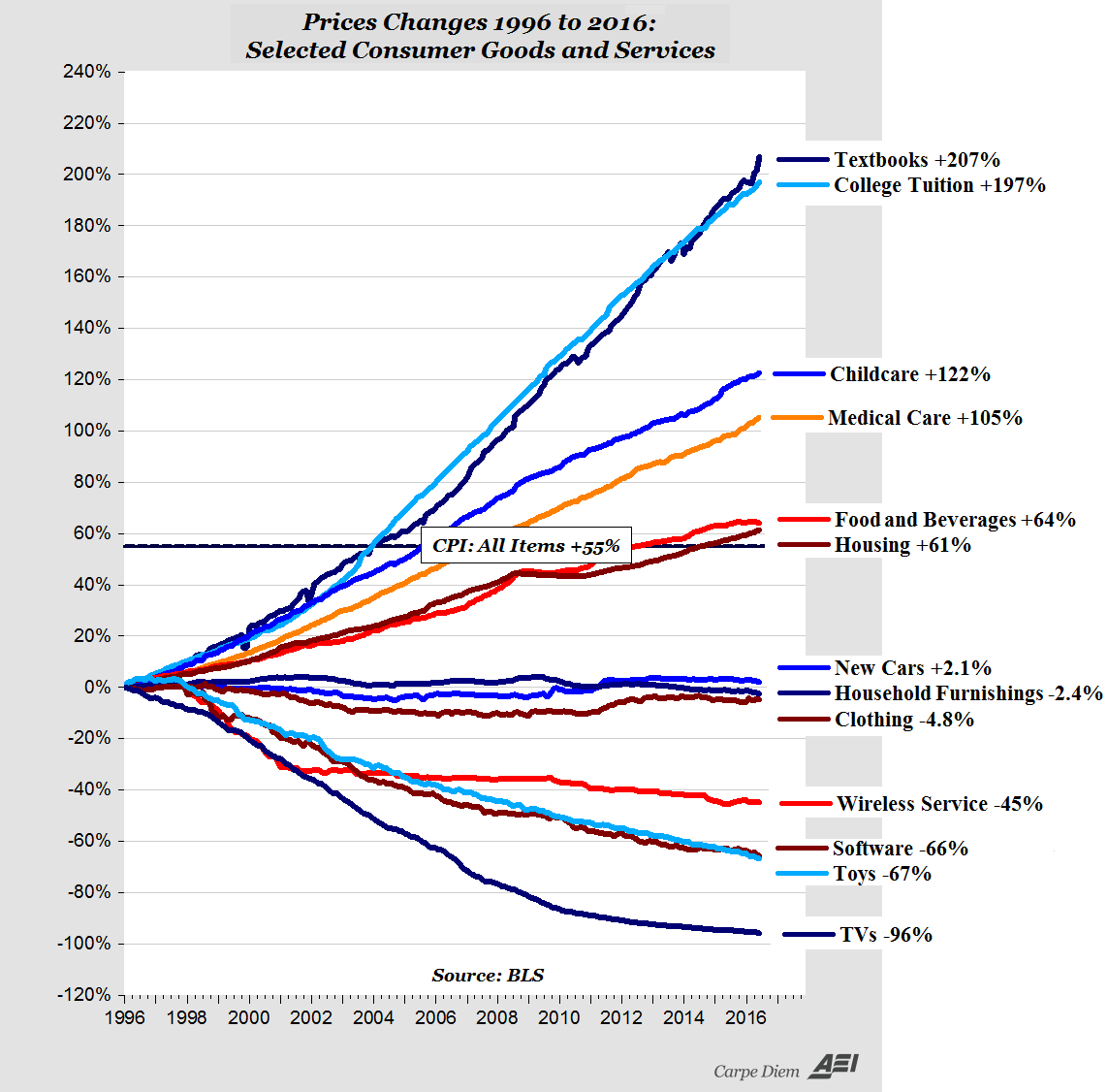 Worldwide, this is borne out writ large if people care to look. The most extreme cases of central planning, the Soviet Union and Maoist China, had the least developed supply chains, the lowest availability of items of need or want, and people frankly starving, whether by the lack of goods production, or by the totalitarianism necessary to maintain substantial restrictions on people’s freedom to do as they please, rather than what the elites demand.

So Tom claims he is entitled to cost-free and completely risk-free products (“The FDA was brought into existence explicitly because of dangerous, life ruining products”), and the right to tell others what they can and cannot do for a living. The free market is “utopian”, but this land of unlimited, risk free products is rational and expected when the producers choices are severely restricted. Mylan is greedy, Tom is not?

I agree, people are greedy. Of course, they’re greedy universally, not just in Pharmaceuticals. When the oil prices declined dramatically in the past few years, did the oil companies’ greed suddenly go away? So in light of the greed, the questions are 1) what is the most ethical way of dealing with this greed? and 2) How can we minimize the impact of this greed, consistent with #1?

My answer is complete freedom of producers and consumers; government causes the problem. Tom’s answer seems to be, in spite of years of government meddling and evidence to the contrary, “more government”. Once again, to quote Robert LeFevre, “Government is a disease masquerading as it’s own cure”.