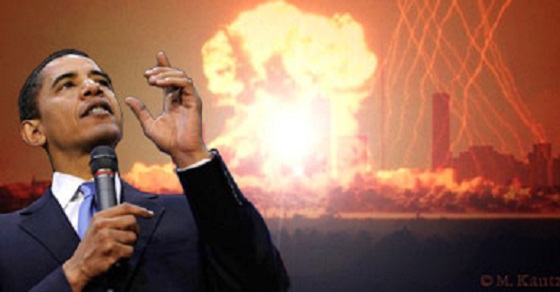 Thanks to the Obama administration, arms manufacturers can now send military parts to most regions of the world without a license.

On Thursday, the U.S. State Department approved the sale of more military equipment, valued at around $1.15 billion USD, to the oil-rich kingdom of Saudi Arabia. This sounds like a lot of money to most of us, but the most frightening aspect of the sale is that it represents a continuation of an arms-dealing relationship between Washington and the Saudi regime, which has been worth over $50 billion USD in arms sales to date.

It is not an understatement to say Obama’s tears over gun violence are disingenuous considering his administration has enacted a policy of systematically arming the entire world with all manner of warcraft. According to the Department of Defense Security Cooperation Agency (DSCA), during his first six years in office, the Obama administration entered into agreements to sell more than $190 billion USD in weaponry worldwide. As the director of the Arms and Security Project at the Center for International Policy, William D. Hartung, states, this figure is higher than any U.S. administration since World War II. Perhaps that is why the Nobel secretary has voiced serious regrets about awarding the Peace Prize to the president.

While there are a number of companies who are making an absolute killing from these sales — like Lockheed Martin and Boeing — the fact remains that the U.S. government actively facilitates this industry in more ways than one.

In 2013, the Obama administration loosened controls over military exports so military equipment could be sent to almost any country in the world with little oversight. U.S. companies began to enjoy fewer checks than they had in the past. For example, thanks to the Obama administration, weapons manufacturers can now send military parts to most regions of the world without a license, which makes it easier for companies to extend their market — even to countries that are on the U.N. arms embargo list. This is because, according to Colby Goodman, an arms-control expert with the Open Society Policy Center, once an item is approved for that exemption, there may no longer be any ongoing, country-specific human rights review as had been conducted previously.

As Mr. Hartung observed, all of this raises a number of issues when dealing with global security:

“36 US allies—from Argentina and Bulgaria to Romania and Turkey—will no longer need licenses from the State Department to import weapons and weapons parts from the United States. This will make it far easier for smuggling networks to set up front companies in such countries and get US arms and arms components that they can then pass on to third parties like Iran or China. Already a common practice, it will only increase under the new regulations.”

The expansion of this industry is already well under way, and the U.S. is at the helm. According to Vice News, as of February of this year, the U.S. had sold weapons to nearly half of the countries in the world. The Stockholm International Peace Research Institute found American exports reportedly made up a third of the global trade. A congressional report found that for 2014 alone, the U.S. made $36.2 billion in arms sales.

The Middle East region, hardly known for its peace and security, accounts for approximately 40 percent of U.S. weapons exports. Nearly ten percent of U.S. arms exports between 2011-2015 were sent to Saudi Arabia, and a further 9.1 percent went to the United Arab Emirates (UAE), who are primarily responsible for the humanitarian catastrophe unfolding in Yemen. But Obama is not merely turning a blind eye to the atrocities in Yemen — his policies are enabling its destruction.

The Obama administration is also doling out weapons elsewhere. In May of this year, the White House lifted its arms embargo against Vietnam — a country once ravaged by the United States — and is set to become a rising recipient of U.S. weaponry. The target of the move is China, as Vietnam has been one of the countries participating in a stand-off with China over tensions in the South China sea.

The current U.S. arms industry is worth more than $70 billion a year but no major news outlet is talking about it. Hillary Clinton and Donald Trump are not talking about it, except as far as to state how much more fantastically militaristic they can make the U.S. government.

In spite of politicians’ and weapons companies’ enthusiasm for an arms industry that generates over $70 billion per year, the glut of sales has not provided the world with security. As CNN has reported, the State Department’s 2017 budget request is likely to include more funding for African armies in places like Mali, Somalia, and Nigeria. The U.S. already has a long history of meddling in these nations — and actually helped create the very terror threat they supposedly want to fight there.

Where will this end?

Providing countries with arms so they can confront a nuclear power like China is not going to provide the world with security. There are many who paint China to be the aggressor in the region, however, even if that is the case, provoking these conflicts and making billions of dollars in the process only benefits a select few — none of whom will ever have to feel the pain they inflict on the rest of the world.

This isn’t a case of companies making a profit because the government has little to no say in regulating what goes on. In any given arms sale, the U.S. government is involved in the entire process. Yet this is the same government that claims to passionately care about gun violence domestically while enabling chaos and destruction around the world.

They can hardly be said to be leading by example with their current track record.

This article (Barack Obama: From Peace Prize to World’s Biggest Arms Dealer in 8 Short Years) is republished under a Creative Commons license and appears courtesy of theAntiMedia.org, where it first appeared.

Darius Shahtahmasebi has completed a Double Degree in Law and Japanese from the University of Otago, with an interest in human rights, international law and journalism. He is a fully qualified lawyer in two separate jurisdictions.