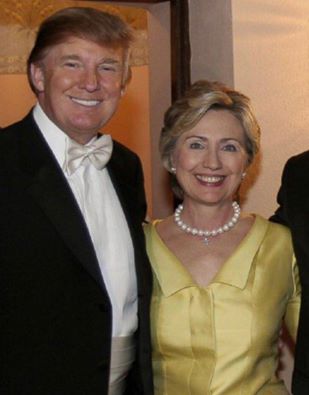 Wow, what a set of nauseating choices we have here.

Trump is an anti-politically-correct champion to many, and vilified and hated by another large population segment. Bernie’s “the-financial-system-is-rigged against you” has vast appeal, but who did the rigging? Perhaps it was his own Party, but so what? Hillary’s not Trump! Big Government was coopted by big finance and big banks (if we don’t bail them out, what will we do?), so that’s why I support Hillary, whom Wall Street banks adore?

The Obama lovers praised his poise and strong message of Hillary support (after blasting the daylights out of her during the 2008 primaries). Can we remind those that his signature “achievement”, Obamacare, was a cozy but fragile coalition between the Insurance Interests, the Pharmaceutical interests, the entitled, and the medical Establishment, all villains of someone’s story. Some people see Obama as a savior, other as the devil incarnate. Anyone notice how a fair amount of economic “success” in the past few years has been at the hands of oil fracking? So is big energy the hero?

People just aren’t sure who the enemy is, except whomever it is, is supported by our political enemies, the other guys.

We will never completely agree on these various villains and heroes narratives. But each pocket of people has one thing in common – if our hero was in control, had the power, we could vanquish our villains, the bad-guys, and all would be right in the world. Such was what gave rise to Clinton I’s message of it’s-all-Reagan-Bush, the Gingrich counter to the rise of Clinton, the Bush II message of aren’t-you-tired of Clinton? It gave life to the rise of the left, post 9-11’s we-love-all-things-America, with the cry of it’s-all-Bush’s fault, the Tea Party recapturing Congress after the excesses of Obamacare, the stimulus, and Dodd-Frank. It was Reagan who said “Are you better off than you were 4 years ago?” Carter was elected after Watergate/Vietnam fatigue, Nixon with the frustration of a president who was so unpopular he wouldn’t run for reelection. If we can just vanquish our villain, all we be right. But it never is, the Debt gets bigger, the regulatory state gets bigger, the Empire gets bigger, and the cycle continues, and the frustration grows. Are we near a tipping point?

If Trump wins, the Presidency will be a complete mockery of itself, apparent to all. Some will still see we just need a different leader. But hopefully, many will start to get that Trump isn’t all that different from those who came before him. Throwing the bums out doesn’t help if we just get new bums. Alternatively, Hillary’s coronation, as the quintessential establishment candidate cannot slow the thinking that the game is rigged by those in control. Both parties are melting down, perhaps the Democrats less so, but only because they are more unified in their story of “if not Hillary, then whom?”

Messages which strongly resonate with a some of us repulse others. That’s because politics is a game of winners and losers. The victors get to rub it in the face of losers. “we’re not going to take it anymore” bind with the “well, he doesn’t represent us well, but he is a Republican, and that’s who I have to support. Not very different from Clinton II feel-the-Bern supporters

The government doesn’t represent all of us, because that’s impossible. Perhaps if we got off the notion that a coalition of tribes gets to push other people around for the benefit of the mysterious “consensus”, the spectacle of Trumpism has its upside. There isn’t much difference between either party. The Republican platform this year looks like Clinton I’s platform. Hillary is running against that with a foreign policy that reminds many of Cheney.

People are starting to wise up, slowly. This is not the worst election ever. It’s just people are getting more aware of just how busted our Government is, and are getting less comfortable with always defending their party.