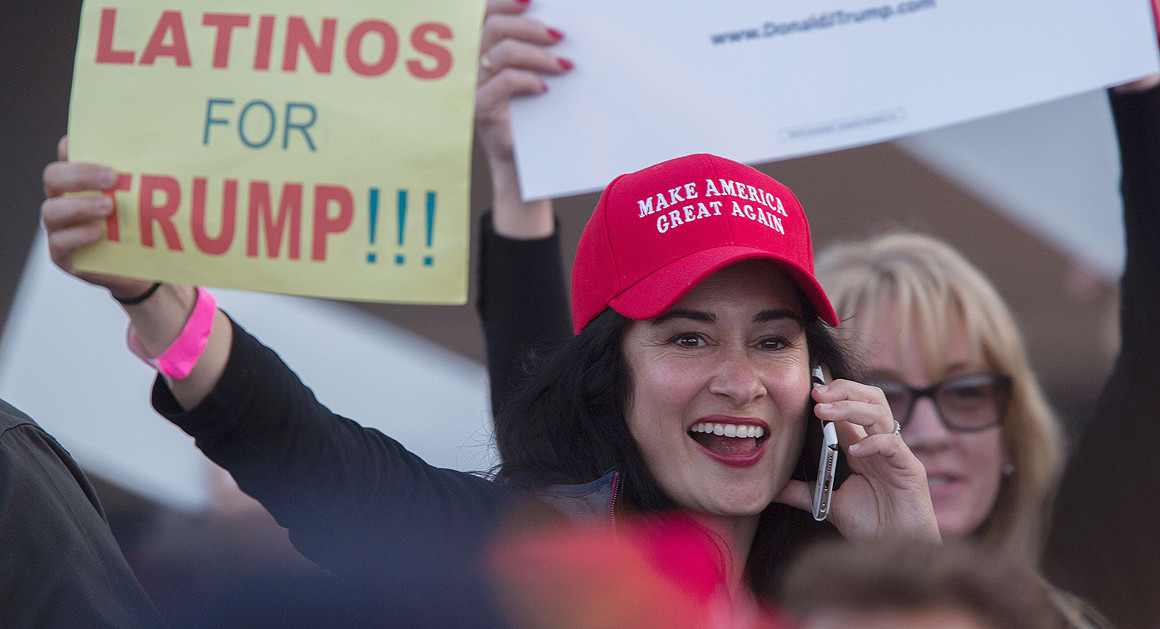 It’s commonplace to assert that Donald Trump is a xenophobic racist — hostile not only to immigrants but to the political aspirations of the nation’s 60 million Hispanics.  And not surprisingly, most polls seem to suggest that the vast majority of Hispanics view Trump and his candidacy with extreme antipathy.

Trump’s critics say he is destined to lose key swing states like Florida and Colorado where Latinos comprise a significant share of the electorate. If so, they argue, it will doom his chances of victory in November.

But that’s not necessarily true.  Trump is performing extremely well with a growing pool of White voters — while Clinton is substantially under-performing compared to Obama in 2008 or 2012.  And when gender is factored in, Clinton is polling among white men at the lowest level of any Democratic candidate in recent memory – just 25% in Florida, for example.

When you combine these two results, Trump’s historic advantage with Whites is largely offsetting his disadvantage with Hispanics.

When Trump first announced his candidacy he caused a stir with his depiction of Mexican immigrants as “killers and rapists.”  But that broad brush attack, far from hurting him politically, proved to be his entrée into vast portion of the White electorate, including some Democrats.  His steady drumbeat of rhetoric actually helped him run away with the GOP primaries.

And it’s not clear how badly it’s hurt him since. Recently, he’s been rebuked by his own party for his comments about a judge of Hispanic ancestry and for his political attack on New Mexico governor Susana Martinez — the first Latina governor in US history — during a campaign swing through her state.

But far from being “missteps” – or signs of sheer recklessness – these seem to be more evidence of Trump’s determination to challenge “political correctness” and to maintain a pugnacious style and image that plays well with White voters, especially men.

In recent weeks, the Trump campaign’s calculation seems to be shifting again.  Under fire from GOP leaders, he’s revising his policy stances and toning down some of his rhetoric. For example, he’s largely abandoned his previous call for a mass deportation of illegal immigrants, and has downplayed the need for a border wall.  He’s also reaching out to Hispanic evangelical leaders who can help get their die-hard Christian religious base t0 the polls.

And he’s agreed to seek a rapprochement with Martinez as well as with Florida senator Marco Rubio, his bitter presidential rival during the primary campaign, and another one of the party’s rising Hispanic stars. Rubio is more moderate than Trump on immigration and is popular with the state’s Hispanics. If the two make common cause, it might boost Trump’s Hispanic numbers, which are flagging badly, giving Clinton a slight polling advantage overall.

Many critics doubt that Trump’s strategic calculations about the demographics of the White and Hispanic vote will prove successful.   They also think it bodes poorly for GOP efforts to win over Latinos, the nation’s fastest-growing voting constituency, in the future.

It’s true: Trump has not retreated from his opposition to immigration reform, including an “amnesty” program for illegal immigrants, a cause strongly supported by most Democrats and even many Republicans. And other than promising to provide jobs, he’s made no special overtures to Hispanics.

But for now at least, Trump’s “Hispanic-lite” strategy may be working. He’s holding his own against Clinton in most of the swing states and has managed to place Blue-trending Pennsylvania – with its large number of working class Democrats — into play. He even leads Clinton in some national polls, while Clinton enjoys about a 4 point polling advantage overall.

In fact, there are already signs that Trump’s recent Hispanic overtures — and his retreat from some of his past rhetoric — may be paying dividends.  One recent national poll found his support among Latinos had ballooned to the low 3os, with no loss of support among whites.

Some observers claim that Republicans need 40% or more the Hispanic vote to win a presidential election. But that calculation has always been based on Democrats holding their own with other demographics. With Trump at an historic high with White males, even matching Mitt Romney’s relatively weak performance with Hispanics in 2012 – just 27%, far below the 44% achieved by George W. Bush in 2004 — may be more than enough to carry him to victory.