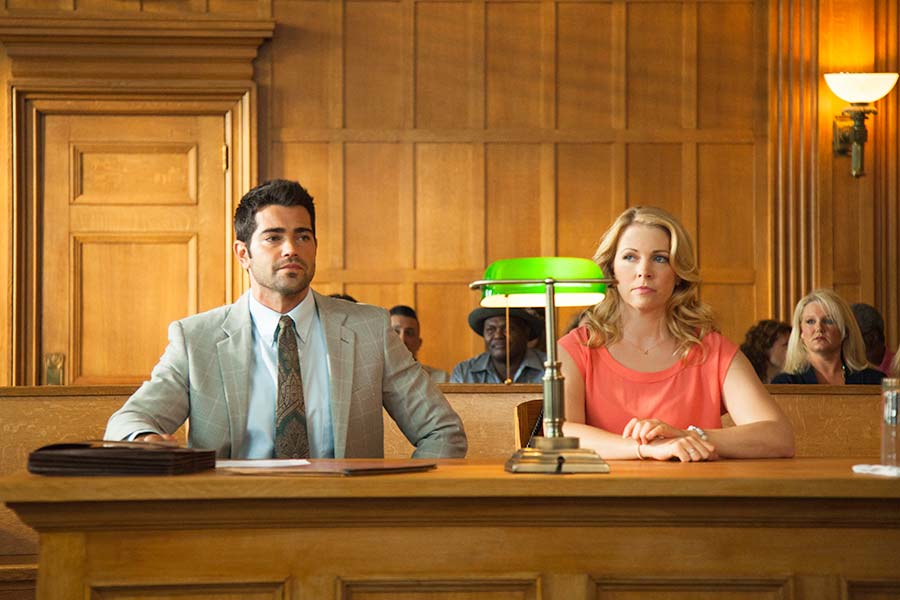 You probably know Jesse Metcalfe from his hit shows, Desperate Housewives and Dallas. His latest project is the film, God’s Not Dead 2. Inspired by real life events, God’s Not Dead 2 follows the fallout when Brooke [The Goldbergs‘ Hayley Orrantia], a hurting student grieving the loss of her brother, reaches out to Grace [Melissa Joan Hart]. Their coffee-shop conversation leads to Grace sharing the hope she finds in Christ. However, when Brooke asks an honest question about Jesus in the classroom, Grace’s reasoned response lands her in big trouble — almost before she finishes giving her answer. Jesse Metcalfe plays Grace’s attorney, Tom Endler. God’s Not Dead 2 co-stars Robin Givens, Ernie Hudson, Ray Wise, Fred Thompson and Pat Boone. I recently sat down with Jesse to talk about everything from the film and the presidential election to daytime soaps and the NCAA tournament.

National Monitor: Studios are more willing to invest money in faith based films. Why do you think that is the case now?

Jesse Metcalfe: Christianity is still the dominant religion in the United States. I don’t think there’s enough faith based content out there. They deserve to be represented just like everyone deserves to be represented. There’s been a greater influx of faith material as of late because a lot of those projects are making money and that is a vital element of what we do in the entertainment industry. It is a business. If we can provide a positive message at the same time, then we’re winning on both fronts.

Were you nervous or excited about taking part in a sequel that you weren’t a part of the first time?

There was definitely a question in my mind about whether to take this role. I initially gravitated to the project because of the script. It was really well written. I like my character arc. More importantly, I wanted to play a part of the conversation about the role of religion in modern society. I knew a movie like this would create a debate and I wanted to be part of that debate.

This movie is inspired by a handful of real life court cases. Did you do any research for any of these cases and did any stand out?

I didn’t research any of the court cases and obviously the court case depicted in this movie is a fictional one that has a historical foundation. I think the reason that we have separation of Church and State is why we have a division of powers in this country. This was included to make sure everyone has a voice. Although this movie is told from a Christian perspective, what I hope that people take away from this film is unity rather than division. Each side has a right to its beliefs. We live in a time that’s more PC than ever. The push back is that Christians feel like they have less of a voice. At the end of the day, we all deserve a voice.

What do you hope viewers will take away when they walk out of the theater?

This movie breaks down the stereotypes. In the first movie, Kevin Sorbo’s character was so full of contempt. The characters in this movie are more real. I don’t feel that Robin’s character is driven by malice. I think she’s trying to skate the line of what is and is not appropriate. How much religion should we have in education? How much religion should we have in government? Those are the questions at hand. It’s not a malicious pursuit. It’s more of a non-malicious exploration of the topic.

Unfortunately, in the political environment that we have right now, I think politicians use religion to confuse issues. I think religion and faith have a much purer purpose.

You’re a young, good looking guy and sometime guys like you can get some weird fans. Have you ever had any weird fan experiences?

Mine have all been pretty good. I don’t like to call people fans. Fan is short for fanatic. It always makes me feel good that people enjoy my work. In the social media age, you can really connect with people who admire you or admire your work. It’s cool to get that immediate response to your work, especially as an actor. [Actors] are greatly in search of validation [laughs]. We all are as human beings.

Have you had any bad experiences with social media?

Not really. In this industry, you have to have a thick skin. More often than not, I think the best policy is to ignore anything that’s negative. That’s what I do anyways.

And probably don’t get too caught up in the hype either.

Exactly. They say, ‘don’t get too caught up in your own hype and don’t be too affected by your detractors.’ I try to live by that.

I love to ask this question when I can, but why did you become an actor?

I was greatly impacted by film at a young age. My father used to take me to the movies at six, seven, eight years old. I saw The Breakfast Club in the theater along with other really cool 80s movies. I love that experience of being taken on an emotional journey and being transported to another time and place. I wanted to be a part of that so I applied to film school at NYU, but on the other side of the camera – writing, directing, cinematography. I ended up acting in some of my own films and I was doing some modeling to subsidize myself while I was going to school. I ended up going to an open casting call for a daytime soap [Passions], got the job and the rest is history.

I’ve heard other actors talk how working on a soap is like being thrown into the fire because you’re learning so many lines every day.

You’re sometimes learning 20 to 30 pages of dialogue a day. It’s like a boot camp for non-actors. At a certain point, I think staying on a soap can become a little detrimental to your craft. That’s not to throw shade on any daytime television actors whatsoever because a lot of them are very, very talented. If it wasn’t for their loyalty to their show, they definitely could have gone on to do other things. After doing my time in the daytime world, I decided to take that shot and it led to other exciting opportunities. I wouldn’t have had it any other way.

I read that you played a lot of basketball when you were younger.

I was a sports fan. I played basketball. I played baseball. I did martial arts as a kid. I ran cross country. I did a lot of things.

Whatever I had read, mentioned that you had played in different basketball leagues, so I wanted to ask if you had filled out a bracket yet?

I haven’t yet, but probably. It depends on whichever friend emails me about a bracket first.

You better hurry because the tournament starts tomorrow. Do you have any favorites right now?

I’m always kind of pulling for my hometown team, UConn. I don’t think they have that great of a shot this year. There are a lot of great teams. I feel like this year, there’s not a stand out talent. I’m more of an NBA guy than a college guy, but I do enjoy the college game.

I have to confess that I am a little bitter about UConn because, since I went to the University of Cincinnati, of their four overtime win against UC. Anyways, speaking of UConn, the women are going for their fourth straight national title this year.

They’re amazing. It’s actually pretty cool, but I went to this luncheon a while ago with some of the Olympic athletes who will be competing in Rio. [Former UConn star] Sue Bird was there and it was pretty cool to meet her. I met a lot of different athletes from all kinds of sports. [The Olympic team] was starting their PR campaign so Matt Bomer and I were there. It was just a really cool experience meeting all these different athletes.

Before Jesse will be watching the Rio Olympics this summer, he can be seen in God’s Not Dead 2 in theaters April 1st.