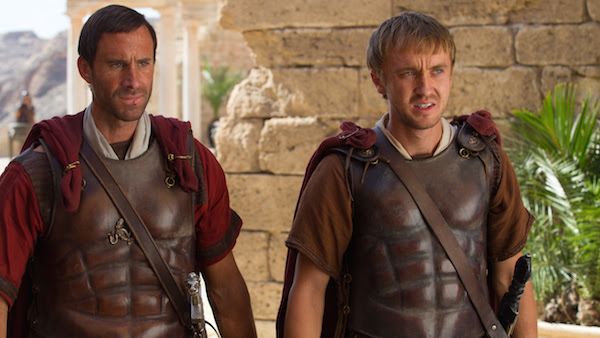 Joseph Fiennes often finds himself playing larger than life characters. He portrayed William Shakespeare in Shakespeare in Love and Merlin in Camelot. He starred in American Horror Story: Asylum, where every character is larger than life and, for good measure, he will play Michael Jackson in the upcoming film, Elizabeth, Michael and Marlon. His latest role in Risen literally pits him against possibly the most famous person ever, Jesus Christ.

Risen is the epic Biblical story of the Resurrection, as told through the eyes of a non-believer. Clavius (Joseph Fiennes), a powerful Roman Military Tribune, and his aide Lucius (Tom Felton), are tasked with solving the mystery of what happened to Jesus (Cliff Curtis) in the weeks following the crucifixion, in order to disprove the rumors of a risen Messiah and prevent an uprising in Jerusalem. Joseph recently discussed his thoughts on murder detectives to The Vatican to even Michael Jackson.

National Monitor: How did you feel about Cliff Curtis not talking to you during the shoot? How odd was that?

Joseph Fiennes: I guess I got more per diems than him or something [laughing]. Every actor has their methodology. I was very respectful and loved that. It’s all about claiming the character and setting up the chemistry. Likewise, I kept away from him until we were filming. Though on occasion, I would hear the tent next door roaring with laughter as jokes were told. I would hear how they went out to dinner that night. I was just lonely with [co-star] Tom [Felton] in our leather [laughing]. I was extremely jealous but not showing it. On a serious note, it’s all about laying down the platform of the narrative for the characters.

After not speaking with him, did it make your first scene that much more powerful?

Definitely, after two or three months of no eye contact, no talking. The first time we really met was on camera.

Kevin Reynolds is a wonderful, veteran director. The story was brilliant – we all know the story, but to film it through the eyes of a non-believer. The challenge for me was here we have a Roman military tribune. He’s part of the death squad responsible for the crucifixion of Christ. I don’t particularly like him so that was my challenge. Also, seeing it through his eyes takes the stigma off of having the biblical element right in your face. The story slowly grows on you. Here’s an opportunity for a film neither be too Sunday School conservative and neither too revisionist. It struck me that you could invite an audience of all faiths and beliefs to enjoy a wonderful piece of cinema. And it’s a wonderful narrative, religious or not, that can provoke discussion. If there’s any takeaway, it’s that we’re all conditioned a certain way. At some point, we have to face our conditioning.

Have you ever been to the Holy Land?

I’ve been to Jerusalem. It’s amazing. I think that’s what Kevin Reynolds was able to do with Risen was to bring that authenticity. I really felt that we were in Judea even though we filmed in Malta and Spain. It’s a big film. It’s cinematic but it doesn’t manipulate. I think the casting of Cliff is authentic. He’s not blonde. He’s not blue-eyed. He’s finally a Christ that’s representative.

How do you choose your roles?

I gravitate towards characters that might want to live by their ideals – that want to live by a certain standard – and they are challenged. I think if any of us say, ‘I’m going to smile and open doors for people today. I’m going to live by that standard.’ There’s going to be a time when you open up the door, but it’s going to be to the rudest person in the world. Then you’re asked, ‘why do you want to open the door for this person.’ Whether it’s James Gregory in the Mandela story [The Color of Freedom] or Clavius or whether it’s Eric Liddell [in the upcoming The Last Race] who I just portrayed, if you set a standard, you will invariably find a force that will challenge you. Then it’s ‘how can you stick to that standard?’ I love to look to people, whether hell or high water, though they might shake a little bit, they are going to pursue their mission. It usually means you’re going against the status quo.

Though the film is obviously set in biblical times, you met with detectives. Was that your idea?

Yeah, it’s just about finding a way into the character. I felt the film features a number of interrogations and I wouldn’t know how to conduct an interrogation. I thought, ‘let me go to a professional who deals in murder investigations. What came out was a couple of things. It was interesting when he told me why detectives always smoke. Why does Columbo always smoke a cigar? He’s got the smell of death in his nostrils. When you go home after you’ve seen dead bodies, you can’t get rid of it. So Clavius is always washing and cleansing to get rid of this smell of death. Then he finds his moment of redemption. Whether you’re religious or not, we can all relate to that sense of a second chance. There’s a redemptive power to the film.

What do you think of the Pope with some of his not-as-conservative beliefs?

He’s shaking things up in a good way. I’m going to Rome and we’ll be screening at The Vatican so I’ll let you know how that goes. It’s scheduled in ten days. There’s amazing artwork in The Vatican. There’s a particular place I want to visit. I think it’s Bellini who made this amazing sculpture. Bellini was brought into The Vatican to make these sculptures. He had had an affair with a woman. She had a baby and the baby was put to death. He was deeply affected and he chiseled out this angelic cherub. Apparently when the sun passes by at a certain time, the child cries. I do have some issues that the one country in the world where the age of sexual consent is 12 is The Vatican. I scratch my head, but it has to do with these antiquated laws that have never been challenged. So there’s a balance with these things, but it’s a real privilege to be offered the chance to go.

Is it a challenge to find scripts with challenging characters?

I did until the other day when I got a script [for the upcoming Elizabeth, Michael and Marlon] and was offered to play Michael Jackson – which I took. It’s a comedy but it doesn’t poke mean fun. It’s a story which is possibly an urban legend whereby Michael, Marlon Brando [Brian Cox] and Liz Taylor [Stockard Channing] were all together on the day before 9/11 doing a concert. The airports were shut down and they couldn’t get out of New York. Michael had the bright idea to rent a car and drive. So the three of them got into a car and drove 500 miles. It took them a while because they had to stop at a lot of Burger Kings for Brando. It’s a love road trip. It’s a lovely story about Michael’s relationship with Liz Taylor and Brando. It’s a fun, light-hearted, tongue-in-cheek road trip.

Risen is now playing in theaters.