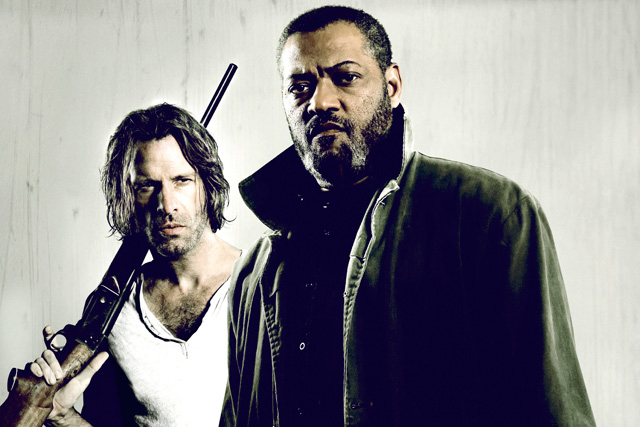 Thomas Jane is a three-time Golden Globe nominee for his role in Hung and he’s a Screen Actor’s Guild nominee as a cast member of Boogie Nights. In his newest film, Standoff, Carter (Thomas Jane), a troubled veteran, gets a chance at redemption by protecting a 12 year-old girl from an assassin (Laurence Fishburne) after she witnesses a murder. Holding a shotgun with a single shell, he engages in physical and psychological warfare in a desperate fight for the girl’s life. He recently discussed how his acting career started in Bollywood, his audition for Boogie Nights and his current film, Standoff.

National Monitor: Unlike most Americans, you got your start in Bollywood.

Thomas Jane: Can you imagine that? I was from the suburbs of Washington D.C. I grew up in Maryland out in the sticks. My neighbor worked in Bethesda, Maryland next to an acting school – the Maryland Academy of Dramatic Arts. The neighbor told my mom to have me check it out and I did. There, a wonderful man named Ralph Tabakin taught me some of the basics. He called me up and told me he knew one of the investors for a Bollywood film that was filming in America. They were looking for a blue-eyed, blonde haired kid to star in this Bollywood film and Ralph told me to go and audition.

This Bollywood film crew went around the country in an RV and a couple of vans to film this movie about this American boy and this Indian girl who meet and run away together across America because their parents don’t want them falling in love. When we finished, we packed up and went to India where I lived for six months.

I turned 17 in India. It was like traveling to another planet. I hadn’t traveled much as a kid. I had grandparents in Alabama and grandparents in New York and those were the only places I had ever been. Going to India was like traveling to Mars. I loved every second of it. The food was better than anything I had ever had in my life. They offered me a contract with the Bollywood film studio and said, ‘we want you to be the white guy, the token white guy in our Bollywood films.’ I filmed a couple when I was over there, but then I got homesick and I packed up my stuff and went home. I took the money that they gave me and bought a car and drove across the country to California.

How old were you when you drove across the country?

It sure was. I didn’t have any money in my pocket. I had a couple hundred bucks. I sold my car and gave my money to an acting teacher and started taking acting lessons. I started doing theatre on Theatre Row on Santa Monica Blvd. I started a couple of theatre companies with friends. We performed plays for orphanages. We did children’s plays. We built the sets and would strap them to the top of our cars and drive down to inner-city elementary schools. We started a little theatre in a store front in East Hollywood and did theatre for years until I was 25.

Boogie Nights is one of my favorite movies ever so whenever I talk to someone who was in Boogie Nights, I have to ask about Boogie Nights. When you were reading the script or shooting the movie, did you have any idea it would become a classic.

I loved the script. It was 180 pages and there were all these different parts. The scene that really stuck out to me was the scene at Alfred Molina’s where the drug robbery goes down. I just loved that scene. The John Reilly part was taken but the Todd Parker part was available so I called up my agent and said, ‘I want to audition for this Todd Parker guy.’ I took the script down to my theatre company and I’d hand out pages to my theatre group and we’d read the different parts. We did that for a couple of days and that’s how I prepared for my audition. My audition was with Reilly and Phillip Seymour Hoffman. We all auditioned together to see how we were as a group for Paul Thomas Anderson. It was one of the better auditions because it was all improv.

We did the scene a couple of times, but what I remember is the improv. It was so much fun and we were laughing a lot. I thought, ‘even if I don’t get the part, it was fun and I did what I could do.’ You don’t find a lot of people who understand what synergy is. Anderson understands what synergy is between actors. People call it chemistry but it’s really a synergy with different people doing their thing. The only way to explore that is through improv. In all my years of auditioning, that was the only time we got together with different actors to really feel who you are in this part.

Most of Standoff is you and Laurence Fishburne, well, standing off. Is it more or less difficult when there’s so few people on the set?

I was interested in the movie because of the idea that it was a two-hander. It would be Laurence Fishburne and I acting together. When there’s basically two people in the movie – there’s a little kid in there too and she’s great – we call it a two-hander. You’re doing these dueling duets, call and response. That’s what was exciting for me. I got to go out and exercise my acting chops with a great actor, Fishburne. The two-hander aspect doesn’t come around that often. I think people that really enjoy acting will enjoy this picture.

Standoff opens in select theaters and on Video on Demand February 12th.