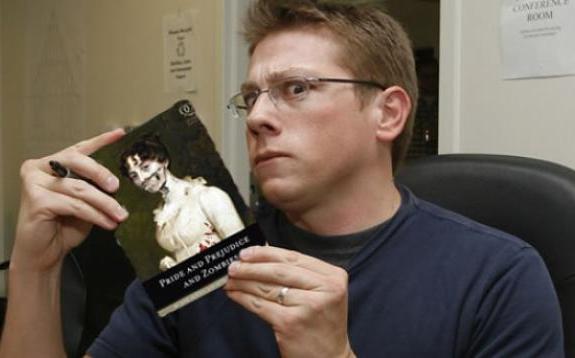 Seth Grahame-Green holds a copy of his best selling novel which was adapted for the big screen and is now in theaters.

Seth Grahame-Smith’s 2009 best-selling hit, Pride and Prejudice and Zombies, is hitting the big screen. In the film, as with the book, a mysterious plague has fallen upon 19th century Britain. The land is overrun with the undead and feisty heroine Elizabeth Bennet [Downton Abbey’s Lily James] is a master of martial arts and weaponry. Casting aside personal pride and social prejudices, Elizabeth and Mr. Darcy [Sam Riley] must unite on the blood-soaked battlefield to rid the country of the zombie menace and discover their true love for one another. The film also stars Jack Huston [Boardwalk Empire], Bella Heathcote, Douglas Booth, with Matt Smith [Dr. Who] and Charles Dance and Lena Headey. Seth recently talked about his career, becoming an “overnight success,” and the fun of Pride and Prejudice and Zombies.

Talk a little about the development process.

Seth: It started 9,600 years ago [laughs]. The development of this movie was pretty typical. People come on. People come off. Scripts get written. Scripts get re-written. Stars attach. Stars detach. It probably seemed longer to me because I’ve had projects that spoiled me in how fast they all came together. It’s easy to say now since we’re sitting here, but I always thought it was going to be made one way or the other.

Once it was ready to be made, were there any scenes from the book that you were particularly excited about seeing on the screen?

The first ball when we first see the girls do their pentagram of death, that’s one I was very excited to see. The other one, which might be my favorite scene in the movie, is at Catherine de Bourgh’s [Game of Thrones’ Lena Headey] manor when Lizzie and Darcy have their first fight. They’re swinging at each other and confessing their feelings at each other at the same time. To me, that gets to the heart of what’s fun in the book.

The challenge is you’re taking these sparring matches that are just words in the book and you’re putting swords in their hands. That’s what’s fun about the book. It’s all there. Jane Austen did all the work. She created these wonderful characters. People try to give me credit saying, ‘you wrote such a feminist icon.’ I’m like, ‘no I didn’t. Jane Austen wrote her.’ I just put a sword in her hand. That’s all I did. I didn’t change her characteristics. [Elizabeth] is actually much braver without the sword if you want my honest opinion.

That was the fun and the challenge of it. There are two things. One is the stuff upper lip of the people of this time. The fact that they are so prim and proper that they would actually be concerned with who was going to marry whom when their country is falling down around them. What Jane Austen was saying that a woman is only as good as the man she’s going to marry is utter nonsense. I didn’t have to change that idea. It’s just even bigger nonsense when you’re in the middle of the zombie apocalypse.

The other thing is the fun and the challenge of the book. I was trying as hard as I could to make this all invisible. When people read my book, in some cases, I want them to have no idea where her passages are ending and mine are beginning. I studied really hard on studying the language and the rhythms of the sentence structure. In the Regency era, aristocrats never used just two words when fifty-two would suffice. I was trying not just to mimic an author, but I was trying to mimic one of the great authors of that age.

This was your third mash-up. How do you pick your targets?

It has to start with a central idea. For this, wouldn’t it be funny if these prim and proper aristocrats were still prim and proper in the midst of a disaster. With Abraham Lincoln: Vampire Hunter, it was I had this crazy idea and wanted to see if I could make people think it was true. For this, I was on a book tour for PPZ in 2009. It was the bicentennial of Lincoln’s birth and it was also the beginning of the Twilight craze. Every bookstore I went to would have these two tables in front. One would have Lincoln biographies. The other would have Twilight. I would actually joke with people at the readings that, ‘if I could put those two things together, I’d be in business right?’

Then it started to become one of those jokes I would think about on the road. ‘So how would that work?’ I found myself in libraries poring over historical letters trying to find out everything I could about Lincoln.

With Unholy Night, to tell you how long ago it was, I was returning a video to Blockbuster. It was the middle of summer in Los Angeles, so I don’t know why I was thinking about Nativity scenes or anything like that, but I was thinking, ‘do we really know why the three wise men were there with gold and frankincense and myrrh? What if they had stolen these things and were also looking for a place to hide that night?’ So that’s how this biblical swashbuckler came about with these three rogues trying to save the baby Jesus.

It has to be an idea that’s interesting and funny to me because these are multi-year processes.

Your fans have obviously embraced you, but what about the literary world?

I’m never going to be on the same panel as Jonathan Franzen. That’s not what I’m interested in and that’s not what people are interested in me for either. Strangely, I think in the Jane Austen world, to my great relief, I’ve been embraced by the so-called Janeites. I was scared when the book started to take off because I didn’t know any Janeites. I thought they had this secret base in England sending out a hit on me or something. It turns out that Jane is a really, really funny writer and the people that love her books get that. I would say that over 90% of the Janeites that I meet really loved it because I let them experience a book that they’ve read many times in a new way. They remind me that Jane herself dabbled in the macabre and had a biting sense of humor.

You adapted Abraham Lincoln: Vampire Killer for the screen but not this.

Six and a half years ago is an eternity in Hollywood. Six and a half years ago, I had no produced screenplays. I was a TV writer who was struggling to get staffed. In April of 2009, these ten years of being in L.A. sort of crystallized in one weird moment where PPZ came out and was a hit. Then I had a show that I had written a pilot for that got ordered to series two weeks after the book came out. It’s the classic overnight success after anonymously struggling for a decade.

Pride and Prejudice and Zombies is now in theaters.