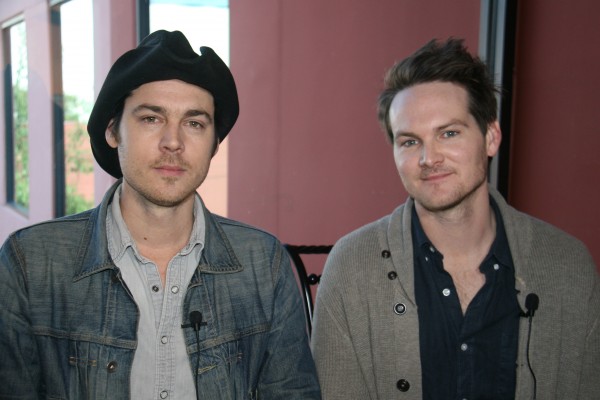 Aaron Nee (left) and Adam Nee (right) discuss their latest film, 'Band of Robbers,' and some of the differences between developing projects for film and television.

Band of Robbers is the latest film from co-writers and co-directors Adam and Aaron Nee. In this comedy-adventure, Tom Sawyer and Huck Finn are all grown up in this reimagined, modern day fable that finds them still searching for a hidden treasure that has eluded them since childhood. The film stars Kyle Gallner, Adam Nee, Matthew Gray Gubler, Melissa Benoist, Hannibal Buress, Eric Christian Olsen, Stephen Lang, Daniel Edward Mora and Johnny Pemberton. Adam and Aaron recently discussed the film with me.

National Monitor: I know the synopsis of course, but I like to hear it from the filmmakers.

Adam: Band of Robbers is a modern day reimagining of Mark Twain’s classic Tom [Sawyer] and Hunk [Finn] stories. The draw of doing this film was of how the stakes changed when these characters are adults in a state of arrested development. They still have that desire for magic and treasure that they had in the books.

Aaron: That’s the concept behind the movie. I’d say at its core, this is friendship story – a love story really – and a break-up story between two friends who were really important to each other in their childhood and are reaching a point where they need to separate or they’re going to destroy each other.

Have you ever had to do that in real life where you had to “break up” with a friend?

Adam: That’s a good question. I don’t think I have.

Aaron: I think maybe in less dramatic ways. You realize if this relationship stays the way it is, then it’s not going to be good for each other. You have to find that transformation. Earlier, maybe it was a good thing, but you just can’t keep doing it the same way anymore.

I feel like there was a sitcom episode about trying to break up with a friend.

Adam: Seinfeld right? Seinfeld had an episode where Jerry breaks up with a guy. It’s Bryan Cranston I think or some actor who’s a big actor but wasn’t a big actor then.

So what inspired you to make the movie?

Adam: We started a long time ago. When I first moved to New York, to pursue acting, I was 21 years old. I auditioned for this Huckleberry Finn adaptation. It was very close to the book. It was a somber retelling. Since it was so close to the book, Huckleberry Finn was 13 and I was 21 so I was way too old. It ended up being this very embarrassing experience with the director looking at me like, ‘how did this guy get in here?’ I walked out of there laughing at the absurdity of what just happened. It occurred to me how funny it was with Huckleberry Finn saying these things as a man and putting him in the same scenario as a teenager. That was the genesis. We talked about it over the years. It started four years ago and we buckled down and wrote it out.

Do you have any embarrassing stories that inspired you Aaron?

Aaron: That story was the spark that inspired Adam and that was something we talked about from time to time. Adam started producing a TV show and that was how our producer John Will got involved working alongside Adam with that. It wasn’t until we made the decision to make a feature film instead of going along the TV route that I got involved. That’s when we started the monumental task of taking two great books with a lot of great stuff and condensing them down to one 90 minute movie.

It’s interesting that you say that since a lot of filmmakers are attracted to TV because of the ability to tell a better story. What made you decide to not go the TV route?

Adam: We had made a very small movie that came out in 2008 called The Last Romantic. That was a movie where we just went out and made it. It wasn’t a big hit or anything but we premiered at SXSW. We sold it to IFC and it helped us out in our careers a lot. Then we went into TV development and we sold a couple shows and were in development for nine months and nothing happened. We were at that point where we wanted to make something that exists – that the world can see. In television, you’re not promised that. With a movie, even if it doesn’t get good distribution or gets no distribution, you have this tangible thing that exists that you can show people and be proud of. The funny thing is now that we’ve done this feature now, people are coming up to us now saying this could be a TV show.

Now we want you!

Adam: Now we want you! [laughing]

Aaron: I think TV’s really exciting, but you sell an idea and it’s not yours anymore. If that show ever makes it to air, it’s still not your idea anymore. The other thing, though this isn’t necessarily true with big budget films, but with independent filmmaking, it’s a space where you really can maintain creative control. Projects like this that have a really distinct flavor to them are really hard to maintain that tone when it’s [made for] television. We wanted to make it the way we wanted to make it instead of waiting for someone to say, ‘you guys can make something now.’

Adam: If you’re like Martin Scorsese going to make Boardwalk Empire, you’re going to make YOUR show. At our stage, we were able to make the movie that we wanted.

Aaron: I would like to get into television. Television is an exciting field. The most exciting thing about television is that it’s a space where you can now tell big stories. That’s what TV should do that cinema can’t. Instead, it told lots of little stories. Now, more than ever, it’s finding that place where you can tell really big stories that have a beginning, a middle and an end.

Adam: I agree with that but the most enviable film space to have, for me, would be like Paul Thomas Anderson or Quentin Tarantino who get to make THEIR movies and sort of have carte blanche to make it their way where it’s like a studio indie.

Readers seem to love hearing about stories from the set. Do you have any good stories to share?

Aaron: I’ll use this as an opportunity for a plug too. If people are excited about stories from the set, we’ve got a great special features package with the movie on iTunes. People love that kind of thing.

Adam: Behind the scenes featurettes are my favorite. I love that kind of stuff.

Aaron: We made sure there’s a very clear “day on set” on there. There’s a commentary where we talk in depth about the thought process. I think lifting the curtain and getting a peak at the process…

Adam: We even have auditions. We have Melissa Benoist’s audition. We have my audition.

You had to audition for your own movie?

Adam: We had to let the investors know what they were getting into.

Band of Robbers is now available on VOD, Amazon, iTunes, Google Play, Xbox and more and Adam promises, “I think Mark Twain would look at this movie and say, ‘they got it. That’s the tone. That’s my essence.’”