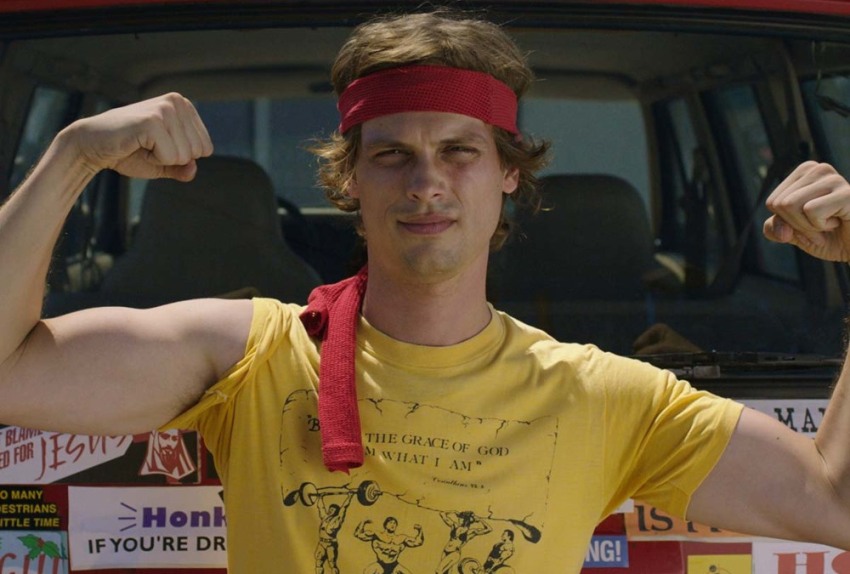 Matthew Gray Gubler has been on the small screen for the past 11 years portraying genius profiler, Spencer Reid, on the CBS hit, Criminal Minds. He can now be seen on the big screen in the new film, Band of Robbers. In Band of Robbers, Tom Sawyer and Huck Finn are all grown up in this reimagined, modern day fable that finds them still searching for a hidden treasure that has eluded them since childhood. The film co-stars Kyle Gallner, Adam Nee, Melissa Benoist, Hannibal Buress, Eric Christian Olsen, Stephen Lang, Daniel Edward Mora and Johnny Pemberton. I recently sat down with Matthew and discussed Criminal Minds, Band of Robbers, his love of horror movies and more.

Matthew Gray Gubler: Have we met before?

It wasn’t last year, but it was two Octobers ago at Universal CityWalk.

That sounds about right. I’m always there for Horror Nights.

You were leaving Horror Nights actually and we were out there with our Interstellar promo stuff and I was like, ‘Hey Matthew, would you want to do this?’

You couldn’t. You were leaving.

Was I with a bunch of crazy people?

You were with a blonde woman.

I know your background, but I’d like to hear it from you. What made you go into acting?

I don’t know. I grew up in Las Vegas. I have a good memory. I was two or three years old and I remember watching Winnie the Pooh and thinking it’s pretty cool to tell stories and entertain people. What I’ve always wanted to do was tell stories. I can’t really trace it back to an exact moment.

I saw on imdb that the school you went to didn’t have Film Studies.

Yeah, the school didn’t have film studies so I focused on acting.

And you did some modeling.

I don’t see anything as being cutthroat. I like everything. I’m an eternal optimist. They both have their fun moments.

Fair enough. First, I have to ask about Criminal Minds since it’s been on for like 50 years.

Do you catch yourself profiling people now?

[I randomly pointed in the direction of the publicists on the other side of the room.] Like that person is a sociopath over there.

I do that too. I might see a person and think, ‘that person is a sociopath.’

When I look in the mirror I say that a lot [laughing].

Some of the episodes are pretty intense. Do you ever have a tough time shaking it off when you leave the set?

All the time. The only thing I know about acting is believing everything is actually happening, so it’s supremely hard to be on that show sometimes. My adrenal glands are probably broken after 11 years of rushing in and putting out fires. It’s slowly driving me insane [laughs]. When I direct episodes, I always direct far-fetched, like magical ones almost. It’s so much easier for me to approach that darkness through the lens of fantasy – where something is so insanely bizarre that it’s not even scary, where it’s almost ethereal. It’s easier for me to be like, ‘let’s turn a human being into a puppet and put on a marionette show.

You directed that episode?

I did. When I first started directing about five years ago, I proved myself as someone who could take something preposterous and make it believable and unique. Because of that, I think the writers see me as the guy to direct the weirdest episodes. After 11 years, I’m family with all the writers.

After directing, does that give you a different perspective on acting?

Definitely. I kind of started out as a director so I always approached acting from the directing world since I knew more about the camera than I did about the stage. In a lot of ways, that’s my secret weapon as an actor. Now that I know both sides like the back of my hand, I feel very fortunate.

And for the show to have been on as long as it has is like a gift for an actor.

I feel like I’ve been onscreen more than I’ve been offscreen that past 11 years.

Since you’re on a successful show, do you have trouble being typecast. I remember Courteney Cox talking about how hard it was for her to get Scream because she had been typecast as Monica on Friends. Do people always just picture you as Spencer Reid?

I don’t think so. I feel like you’re only typecast if you let yourself be typecast. My character in Band of Robbers is the exact opposite of Spencer Reid. I played a character in a movie last year called Life After Death that was a deranged wannabe Navy Seal. Simon the Chipmunk is close to Spencer I guess, but that’s the closest I’ve been typecast.

So what made you want to do Band of Robbers?

I know [writers/directors] Adam and Aaron [Nee]. I think they’re two of the greatest living directors out there. They’re good friends of mine so I was so excited. I feel that if you can survive in this world long enough, it’s inevitable that your friends will start making movies. To be a part of that and to help produce it, it’s like a dream come true. We have the same sensibilities so this was a great opportunity to feel like you were in a band.

When you’re working with people you know, is it harder sometimes because you might be afraid to be critical?

It’s so much easier actually. We have a verbal shorthand. I just know what I want and they know how I’m going to do it. We respect each other’s abilities. It’s so much fun man. Some of my happiest memories are of making movies in my backyard with my best friend and his brother. To do that on a bigger scale, with even better actors – no offense to my friend and his brother – it’s the best.

So what kind of movies did you make?

Very similar to Band of Robbers. I made one called The Adventures of Smiley Matt when I was 10 years old. It’s a western about an escaped convict named Smiley Matt who robs pool halls with a pool cue. I made horror movies. I made a lot of sort of weird, fun things.

What kind of horror movies?

Are you familiar with the Disney films from like 1976 to 1979 such as Watcher in the Woods? It’s one of my favorite movies of all time.

That’s the one with Jodie Foster right?

Yes, that’s right. I can’t remember the last time I talked about Candleshoe or Watcher in the Woods.

It’s been a while for me too.

Since you made horror movies as a child, is that something you see yourself doing?

Totally. Sometime in my life, I’m going to make the best scary movie you’ve ever seen. I promise.

My favorite horror movies are The Shining, the original Changeling, Rosemary’s Baby. I like ghosts. Hitchcock’s the best. Psycho is great. I don’t know what it’s going to be like, but you probably won’t be able to sleep for two weeks though.

So it probably won’t be like an Eli Roth movie.

To me, Watcher in the Woods is one of the scariest movies ever made as opposed to something that shows a lot of blood.

Sort of like Se7en. Everyone talks about how gory it is, but you really don’t see anything.

Sloth was scary in Se7en.

I’m trying to remember which one was sloth.

It was the scene where he’s surrounded by pine tree air fresheners.

Oh yea, the drug dealer. So you said you’re going to make the scariest movie I’ve ever seen. I’m a horror buff so the bar is set pretty high.

What are your favorite horror movies?

As a child, Night of the Living Dead scared the crap out of me.

I had to sleep with a night light for two years.

That movie is great. I love [George] Romero. Have you ever seen Martin?

I loved it man. That was freaking great. Did you see Final Girls?

Do yourself a favor. You’ll love it. It’s this meta, postmodern movie that goes into a 1980s slasher film. It’s great. It’s like Cabin in the Woods but even better. You should check out Trash Fire too.

You’re in that right?

I have a cameo.

Besides his cameo in Trash Fire and his role on the long-running Criminal Minds, Matthew stars in Band of Robbers which is currently playing in select theaters and is available on iTunes and Video on Demand.