Trump retweeted an inaccurate chart showing how many white people are killed by black people. When questioned about the problems with his data, the Republican candidate stated that he can't be expected to check every statistic.

The Washington Post said on Monday that “Donald Trump is leading an increasingly fact-free 2016 campaign” after the Republican presidential hopeful stated that he saw “thousands” of people cheering in Jersey City as the World Trade Center came down on 9/11. Now the facts are being called into question again with the Trump turning his increasingly racial rhetoric toward blacks with the retweet of a set of incorrect facts about racial violence. 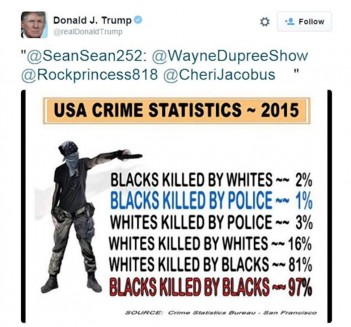 The tweet from Trump that gave these statistics was a retweet from someone that Trump said was “supposedly an expert,” and that he heard the numbers on a radio show. When confronted with the discrepancies in the data he tweeted, Trump replied “Am I gonna check every statistic?”

The tweet, which was sent out on Sunday, came a day after a black activist was punched and kicked by Trump supporters at a rally in Alabama. Mercutio Southall Jr. went to the Trump rally hoping to ask a question and to protest what they see as racist statements from Trump. Southall said when he arrived at the rally the other attendees left a wide space around them and they felt extremely unwelcome.

Southall’s friend began to livestream himself, saying “we want to show [Trump] that he’s not welcome here.”  A man in the crowd heard him and knocked the phone out of his hand. The three activists started chanting “Black lives matter.” The crowd responded by knocking Southall down and kicking, punching and choking him. The attack was captured by a CNN video.

The day after the rally Trump said that Southall deserved it. He told the hosts of Fox & Friends that Southall is an agitator and maybe “should have been roughed up.”

When Robert Kiger, leader of the pro-Trump “Citizens for Restoring USA” super PAC was interviewed by CNN he said that the Black Lives Matter movement does not have the right to protest at a Trump rally. He said “I wouldn’t go into a black church and start screaming ‘White Lives Matter.'”

Trump’s rhetoric has been strongly against Mexicans and Muslims, to the point of his proposal of a mandatory database of all Muslims in America. He has also suggested that a wall be built on the U.S.-Mexico border to keep out the rapists and criminals that Mexico is sending to the U.S.