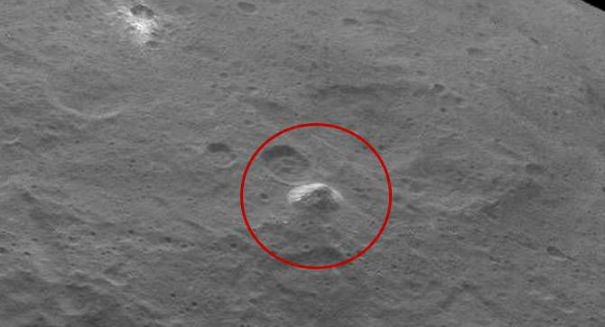 The bizarre dwarf planet of Ceres has wowed scientists with two mysterious bright spots, now it has another odd feature: a pyramid.

NASA’s Dawn spacecraft has been taking some close looks at the surface of the dwarf planet Ceres in the asteroid belt, and it has spotted some astonishing features beyond just the bright white spots — and one of them is a pyramid that looks like the one in Egypt.

The weirdness of Ceres just keeps growing as Dawn takes closer peaks of it on ensuing flybys, and NASA posted its latest video on Thursday, according to a CNET report.

It’s a high mountain too, rising even higher than Mt. McKinley, the highest peak in the USA at 20,000 feet. There also appear to be bright streaks going down the pyramid’s sides.

The Dawn mission has also been taking a closer look at those bright spots that scientists have been scratching their heads over. They sit inside a crater that measures about 60 miles in width and is about 2 miles of depth. However, scientists aren’t any closer at identifying what they are or what causes them.

But the pyramid-looking mountain is the new discovery, rising 4 miles into the air, with one side strangely dark while the other one glows with streaks — almost like those mysterious bright spots, so perhaps they have the same cause.

The Dawn space probe was launched back in September 2007 by NASA with the goal of observing two of three protoplanets in the asteroid belt, Ceres and Vesta, the former of which it is currently in orbit around and has been for the last few months since arriving in March 2015. It had previously been in orbit around Vesta back in July of 2011, where it conducted a 14-month survey mission before blasting off to Ceres.