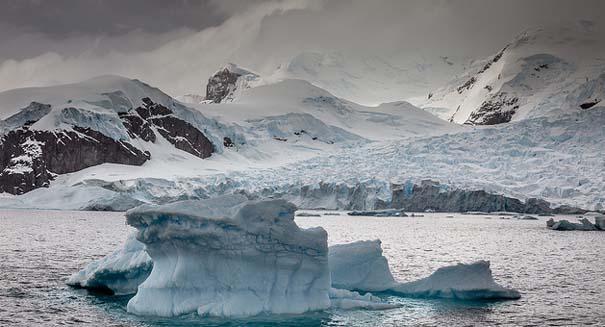 For the very first time scientists have traced the water underneath Taylor Glacier in Antarctica to learn more about the mysterious Blood Falls.

According to an April 28 LiveScience news report, for the first time, scientists on Antarctica have have traced the water underneath Taylor Glacier to learn more about the mysterious Blood Falls, which is a rust-colored liquid brine that pours into Lake Bonney in the southernmost of the three largest Dry Valleys.

The subsurface network connects the valley’s scattered lakes, revealing that they’re not as isolated as scientists once thought. The findings of the study were published April 28 in the journal Nature Communications.

“We’ve learned so much about the dry valleys in Antarctica just by looking at this curiosity,” said lead study author Jill Mikucki, a microbiologist at the University

of Tennessee, Knoxville. “Blood Falls is not just an anomaly, it’s a portal to this subglacial world.”

research team that tested a newly developed airborne electromagnetic sensor in Taylor Valley. The flying contraption is a large, six-sided transmitter suspended beneath a helicopter. The instrument creates a magnetic field that picks up conductivity differences in the ground to a depth of about 1,000 feet.

LiveScience reported that the researchers found liquid water underneath the icy soil in Taylor Valley, stretching from the coast to at least 7.5 miles inland. The water is twice as salty as seawater, the scientists reported. There is also briny water underneath Taylor Glacier as far back as the instrument could detect, about 3 miles up the glacier, the researchers said. Eventually, the ice was too thick for the magnetic field to penetrate.

“This study shows Blood Falls isn’t just a weird little seep,” Mikucki told Live Science. “It may be representative of a much larger hydrologic network.”

Researchers believe that water underneath Taylor Valley could have turned extremely salty in two ways: The brines could be due to freezing and evaporation of larger lakes that once filled the valley. Or, ocean water may have once flooded the canyons, leaving remnants behind as it retreated. The new findings will help researchers pin down the valley’s aquatic history.