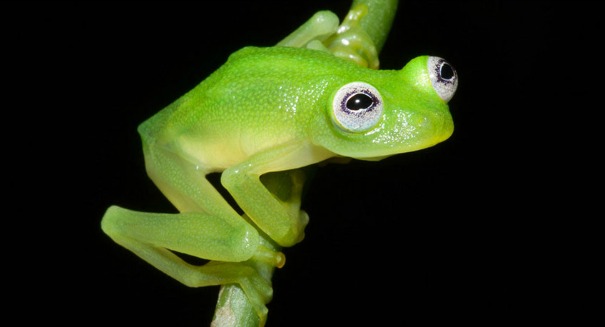 The new species of glass frog is actually surprisingly aggressive, and it can't hold a tune like Kermit.

A newly discovered frog species in Costa Rica knows it isn’t easy being green — perhaps because he looks just like Kermit the Frog.

The bright green frog even has eyes that look like the famous muppet, who appeared in an interview on Oh My Disney discussing the newly discovered species, named Hyalinobatrachium dianae — a name that’s too long, if you ask Kermit, according to a Today Show report.

“Shorten your name if you want to make it in show business,” Kermit said, remarking that maybe it should be something like Diane Glass or Kermina Kardashian.

He further acknowledged that the eyes are “a family resemblance,” noting that “Googly eyes run in our family.”

It can’t sing like Kermit, however, instead using a long whistle similar to that of an insect, which may have made it difficult for scientists to track it down, according to a National Geographic report. It’s the first glass frog discovery since 1973.

It has been named Diane’s Bare-hearted glass frog and is just an inch long. It was first detailed earlier this year in the journal Zootaxa.

Glass frogs are found in the rain forests of Central and South America, where they live in tree canopies, descending to the ground only to breed.

They are called glass frogs because they have translucent bellies that allow you to see their organs. The green color on top helps them stay camouflaged in the leafy canopy.

This species can be fairly aggressive, fighting with other males who encroach on their territory.

Glass frogs are a diverse family that can be found from southern Mexico to Panama, and through the Andes Mountains in South America from Venezuela to Bolivia, and some species have been foundin the Amazon and Orinoco River basins and as far south as northern Argentina.

They are typically found along rivers and streams during breeding season, and spend most of their time in the cloud forests. They deposit their eggs on the leaves of trees or shrubs that hang over mountain streams and rivers, with one species leaving its eggs near waterfalls.