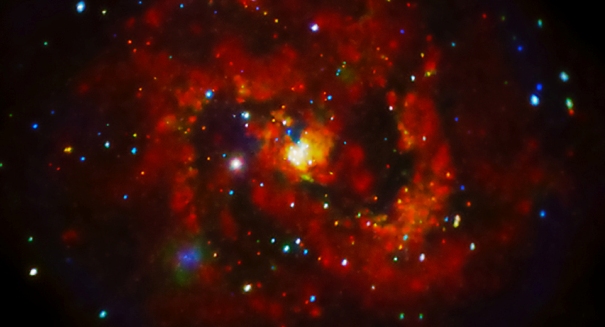 Astronomers combined the powers of the European Space Agency's Herschel and Planck space observatories to peer deep into the past to see how galaxy clusters form.

Scientists have discovered the precursors to huge clusters of galaxies that are seen today, and it’s all thanks to the European Space Agency’s Herschel and Planck space observatories.

Astronomers have combined observations of the distant universe made by the Herschel and Planck space observatories to discover what led about to the huge galaxy clusters we see today, according to a Space Daily report.

Galaxies are rarely found floating on their own, and instead are usually found in large clusters of galaxies of tens or even hundreds. However, clusters like this haven’t always existed, and the question has always plagued scientists: how and when did they form?

With these new insights, scientists should now be able to form better theories and gain new insight into how galaxy clusters evolved, including how dark matter influences these formations.

Astronomers used the Herschel and Planck observatories to peer deep into space and into the distant universe, examining what the universe looked like at 3 billion years old. Brenda Frye, an assistant astronomer at the University of Arizona’s Steward Observatory who participated in conducting the research, said that scientists had discovered a cluster of galaxies that might be what a baby cluster would look like, according to the report.

The goal of Planck is to create a precise map of relic radiation from the Big Bang by mapping the whole sky in a number of different wavelengths, while the Herschel observatory was meant to spot objects across the far-infrared to submillimeter wavelength range with much higher sensitivity and angular resolution, the report states.

By using the Herschel observatory, astronomers were able to determine that the Planck-detected sources appeared to be consistent with the dense concentrations of galaxies that were churning out new stars in the early universe.

Each of the galaxies seem to be producing up to 1,500 suns worth of new star mass each year, compared to just one per year in our own Milky Way, indicating a burgeoning young galaxy.

This suggests that these young galaxies were forming at a breakneck pace.

Still, there’s plenty of mystery still to uncover. In some cases, astronomers are finding just one objects instead of a cluster, which “we shouldn’t be able to see,” Frye said.