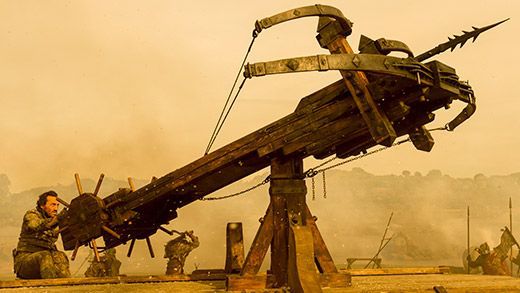 Rhaegal shouldn't have gone down like that. Not from a story perspective, but just bad writing.

So here we go with another Game of Thrones report. If you’re like me in that you’ve watched every episode of every season, well, then you’re like me.

If you haven’t, spoilers ahead.

I know it’s the last season, but why does it seem like the writers have gotten lazy?

Aside from the fact that I’ve never written a TV show that has outperformed every TV show in the history of ever, I somehow claim the right to make commentary. So here’s my beef:

I’m not alone in asking why the dragons didn’t see a fleet of enemy warships in the channel where they were supposed to be hunting for enemy warships.

Clearly, the Scorpion is a powerful weapon. It resembles a Ballista, which had an effective range of about 500 yards. In order to reach that range, the weapon had to be fired at an angle on the order of about 45° (basic physics). This means the projectile would come down upon its target at the same angle. When the Greyjoy fleet attacked Danerys’s fleet, the weapons appeared to hit at a flat trajectory despite being fired at least 500 yards away. Judging from the apparent impact force, the bolt is also quite heavy. This means there’s a LOT of power behind it—certainly a lot more than anything medieval Earth technology was ever capable of.

This, I don’t have a problem with. If you can accept dragons vs. zombies in the first place, you shouldn’t have an issue with extremely powerful siege weaponry. Of course just by looking, I wonder if it can fire at a target directly overhead; that’s one heck of a blind spot if the dragon can simply go high, drop down directly above and roast the crew without opposition.

I didn’t build the thing.

The issue is that when the ships attacked the other ships, they were clearly within the line-of-sight. In order to be able to hit a target at altitude, the weapon would have to be closer in order to have the same effective damage. Which means the dragons should have seen them. Given they had already been charged with prowling the waters for enemy ships in an earlier scene, there was no reason for them not to have. Which means the attack shouldn’t have been a complete surprise.

Add to it the fact that Danerys and her dragons had all seen this weapon before when they roasted the Lannister army just a few seasons ago. Drogon got hit with the thing, in fact, so they should have been aware of it. But we can grant she might have forgotten or gotten careless and not realized Euron’s ships were equipped with such a weapon. Then she should have at least seen the ships, attacked, and then Rhaegal could have been killed that way. Could have, would have, should have. It would have taken the writers of the show all of ten seconds of screen time to spot the enemy fleet and swoop down to attack. The end result would have been the same, but at least the show wouldn’t feel so sloppy.

Leaving out why Rhaegal was flying into battle when he was too weak for Jon to ride him in the first place.

Couple this with the excessive use of last-second heroics both in the last season and this one, the growing propensity to indulge audience expectations, and the show is actually starting to look a little campy. Had writers pulled this kind of crap back in season 1, there wouldn’t have been seven other seasons.

Anyway that’s my opinion, and you’re welcome to disagree.