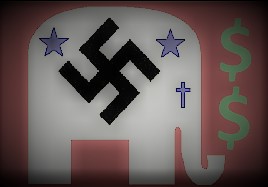 I do try to pay attention to what the other side is saying.  Lately, I’ve been inundated with news reports of the latest Trump shenanigans.  Omarosa tapes, revoking a former CIA director’s clearance, using the N-word, not to mention treason, fraud, money laundering, and so forth.  It seems inconceivable how someone could still support this president at this point after all that’s happened, after all that’s come to light.

Felt this same way a year ago.  I wrote this article a year ago, and I still feel the same way.  Wake me when it means something.

The issue, of course, isn’t Trump at all.  It’s the Rupublissian party.

This group of people have been so hell-bent on advancing their lackwit agenda that it doesn’t matter the damage they do to the country.  Take Mitch McConnell, for example.  Not really a Trump supporter, but a man who thinks he can manipulate Trump by dangling a Sword of Damocles in order to get his beloved tax-breaks-for-the-rich passed.  The result?  Turn a blind eye to the fact of treason and electoral sabotage happening before us.  What does it matter if Democracy is subverted; we must push that conservative agenda!

And so across the country elections are getting rigged, manipulated, and otherwise compromised by a foreign power, and the party in power is an active participant in that compromise.  If you’d asked me a year ago if the NRA was being used as a funnel for the Kremlin to cherry-pick Russian-friendly congressmen, I’d have thought you some crazy conspiracy theorist.

And yet, here we are.

And yet, the Trump administration, after having been given $120,000,000.00 to fight election rigging, one of his biggest campaign issues, has spent a big, fat, donut.  Then he offered to let the very foreign power doing the rigging to help out with election security — a power notorious for a plethora of flagrant election violations.

How the #%&@ can people, American people, still support this kind of leadership?

I do try to pay attention to what the other side is saying.

Last week, Ben Shapiro offered to debate liberal darling Alexandria Ocasio-Cortez, even going so far as to offer a $10,000 charity donation for the publicity she would undoubtedly give him.  I didn’t understand why she would turn him down.  Now, I do.  You can’t engage in ideological discourse with someone who has no intention of having a discourse.

In short, she didn’t feel like paying Pigeon Chess.

I don’t like to make generalizations.  And in all truth, there are some leaders in the GOP that I admire and respect, even if I wholly disagree with them on policy.  John McCain, Trey Gowdy, and Rand Paul come to mind.  Looking back, I don’t agree with half the criticisms levelled against Bush Jr, and even Jeff Sessions — he may be a racist fossil and a moron, but he strikes me as someone who executes his office with integrity, and that means something to me.

But when I watch people like Tucker Carlson defend the revocation of former CIA director John Brennan’s security clearance, I don’t hear coherent argument.  What I hear is mocking, name-calling, ridiculing, and deliberately twisting things around to fit his pre-determined subjective reality.  He brought on a liberal commentator to ostensibly ask him questions, but then rejected every answer without even listening to what the man had to say, repeatedly interrupted him to bulldoze his perspective through, and then asked the same questions all over again, only to trumpet how the guy wasn’t able to answer them.  And I thought journalists were supposed to seek out the truth rather than project it.  What do I know?

So this is reality.

Try to imagine this.  You’re with someone who doesn’t listen to a word you say but rather mocks you and insults you every time you try to answer their questions.  They lie over, and over, and over again, then tell you truth is subjective, but of course God is on their side.  They act like (and treat you like) they’re superior in every way and anyone who disagrees is a whiny baby, but of course when you point out objective facts they conveniently ignore them, and when you call them out on that they accuse of trying to silence their perfectly valid point of view.  They borrow ridiculous amounts of money, spend it all, then blame you for being fiscally irresponsible.  They’ve alienated all your friends and invited your enemies into your home.  At some point, it grows difficult to call the dysfunction bi-partisan.

Oh, they’re also fucking that Russian dude down the block.