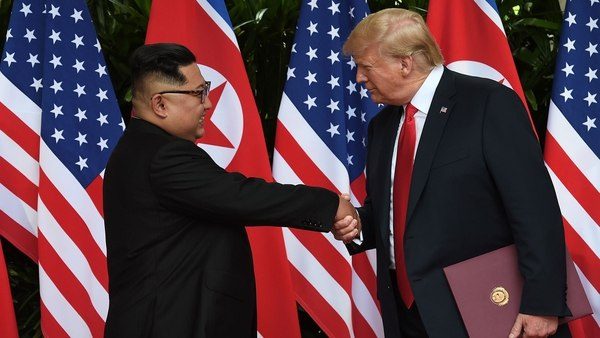 If you watch the news you will see that Trump’s recent summit with Kim Jong Un was a total disaster.  It’s been hailed as a PR victory for North Korea.  But was it?

The contention is that Trump sang praises to a ruthless, evil dictator, and ignored all the human rights abuses.  He agreed to stop the joint military operations between the US and South Korea, and accepted only vague promises that North Korea wanted to denuclearize the peninsula, promises they’d been making for decades while simultaneously building nuclear weapons.

In the 1950s, the Korean War erupted over a dispute between who was the legitimately elected leader of the country.  Backed by Soviet communists, the North invaded the South on the assumption that the west wouldn’t have the stomach to get involved.  They were wrong, and after three bloody years a United Nations coalition led by the USA was able to push back the invasion.  Technically, the war was never ended, and we’ve been under a temporary cease-fire for the past seventy years.  In the 1990s, the Soviet Union collapsed and with it, material support for their former allies, including Cuba and North Korea.  While Cuba managed to rebound some, North Korea has not.  What followed was famine, labor camps, disease, and the speculation that millions of people may have died.

Today, the country lives under forced reclusion.  The people are mostly destitute, starving, and corruption and drug addiction are rampant.  And while his people starve, the elites hold vast fortunes in foreign banks from counterfeiting, forgery, cyber-fraud and other online scams, and narcotics trafficking.  Kim Jong Un is estimated to be worth around five-billion dollars from these endeavors.  Meanwhile, basic access to information about the outside world is denied, and defectors are shot on sight.

To any humane observer, the liberation of the North Korean people would be a noble goal.  And to that end, the approach we’ve been using for the past seventy years has not produced anything.  Namely, sanctions, threats, huge displays of military power, and political isolation.  If anything, these approaches have only served to turn the regime more corrupt, more reclusive, and more repressive.  It’s hard to say it’s been working.

So then, here’s where Donald Trump works his magic — a magic no other US president ever could.  Yes, he’s a serial liar and career con artist, but that’s the beauty of it.  Everything about the way Trump approached Kim Jong Un from the praise of his leadership to the fat joke to the very much publicized fight he’s had with the American free press is something he can use to schmooze the dictator.  Butter him up.  Soften the hardass.  That’s Trump at his finest.  This is why we voted for him (myself excluded, of course).

And what would be the point of that?

Because the walls of oppression around North Korea are so taxed that all it takes is a little crack.  Let them open the doors and give the people a glimpse of life in the outside world.  Maybe.  It might just work.

Michael Patrick Lewis is a teacher, Trump-hater, and bestselling author of Edge Of God and Preferred Rewards.  You can also find him on Twitter @fakeMikeLewis.