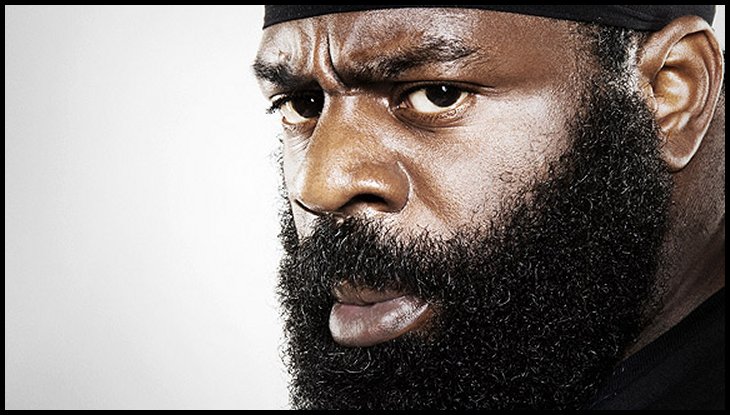 I haven’t met a lot of people in my lifetime of whom I can say this is a sincere, true human being. I knew him as a naturally kind and generous man, whose boisterous and outgoing presence could fill up a room.

Yes, I know; that’s a bit random.  Not the sort of thing one might expect to hear about given the man died two years ago and hadn’t been a major name in professional fighting for a while before that.  But I miss him.

I first heard the name Kimbo Slice while I was living in Miami.  I didn’t know much beyond that allegedly he was a real badass fighter.  I hadn’t looked him up or anything then, and so that was the extent of it.

When we moved into our neighborhood in 2013, I was told there was a boxer or a UFC fighter or a karate man or somebody like that living around.  It wasn’t long, though, before my wife and I started cleaning up our back yard when one of the neighbors, a big, meaty black man almost as tall as me but with big, giant muscles and a long beard came up and introduced himself.

And this was a contrast.  While most of our neighbors would walk past, silently gawking and judging whether or not we displayed enough status to belong there, we were doing our own yard after all, Kevin “Kimbo Slice” Ferguson was never short of friendly and welcoming.  We would chat about raising children, he had six, about gardening and the inherent beauty of the Bismarck Palm which he admired enough to plant one in his own yard, and the seeming coldness of this uppity community that he’d noticed just as I had.  His favorite hedge was ficus because of the total privacy it offered, and he marveled when I pointed out the giant tree in our yard, the product of not hedging a ficus for thirty years.  He told of how he came to his stage name because it sounded scary and I teased that I didn’t think Kevin Ferguson could beat anybody up.  He laughed at that.

Do you know, he offered to let me borrow his truck?  Putting in a lawn, he figured, may require some heavy work and he flat-out offered.  How many people in the world would do that?  How many people do you know who, if you asked to borrow their truck, would let you?  But no, he took the initiative and offered.  Out of the blue.  That was the kind of man he was; that was the kind of neighbor he was.  A few weeks later I took him up on that and we drove out to Home Depot to rent a stump grinder.  He asked me not to tell anyone but he was supposed to go on Dancing With the Stars, though I guess that’s moot now.  He told me about his appearance on Scorpion King 3, and I’m sorry but that’s a truly horrible film, and made jokes about how an advertiser wanted him to do a commercial wearing a tutu.  I told him about some of my writings and he was genuinely interested.  He even offered to get me on the set of Reality Kings.  I had to decline, of course, and made him promise not to inform my wife that I knew what that site was about.  That made him laugh, too.

He got started as a bouncer in a strip club, long ago.  As part of a side gig, to hear him tell it, big-shot drug dealers would often bring their entourages into the club and would make after-hours bets to see who would win in a fight between him and their best thugs, and he started making good side money that way.  Then one of his buddies recommended recording some of those fights and putting them up on YouTube, and the rest is history.  The thing he liked best about fighting, and boxing especially, was the interplay between him and his opponent — he saw it as a chess match, effectively.

I haven’t met a lot of people in my lifetime of whom I can say this is a sincere, true human being.  I knew him as a naturally kind and generous man, whose boisterous and outgoing presence could fill up a room.  I boasted of my jambalaya and threatened to invite him and his family over for dinner; that got him excited.  Then before I could follow through with that I stood looking outside the bathroom window and saw an ambulance pull up to his house, and a few days later I learned he’d died of heart complications.  I tried not to remember the stories he told me of all the drugs he’d done in his younger years and instead I just felt sad.

Michael Patrick Lewis is a teacher, Trump-hater, and bestselling author of Edge Of God and Preferred Rewards.  You can also find him on Twitter @fakeMikeLewis.