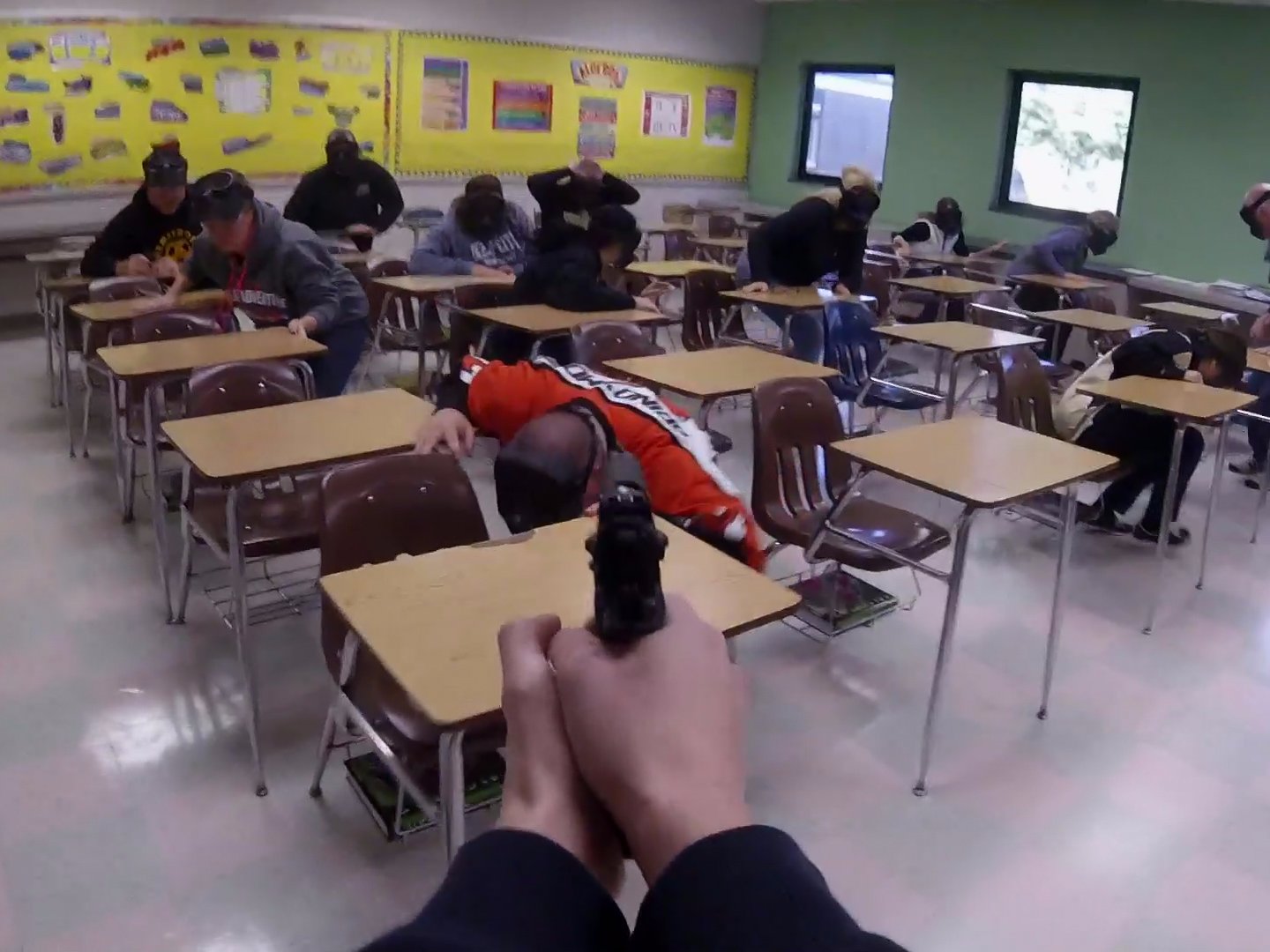 I’ve been reading up on mass shootings lately.  A lot.  And while I haven’t done any hard statistical analyses yet, there are quite a few things that have jumped out at me.  So this is based on my scouring and reading of the news.

First off, this is a major problem.  Ask most people to name an event in which some individual goes on a shooting rampage at a school, and most likely you’ll hear Columbine, Sandy Hook, and Stoneman Douglas.  But how many people remember the Marshall County High School shooting just three weeks before Stoneman Douglas?  There have been many, many more.  We don’t hear about them, I guess, because the number of fatalities is relatively low.  At Stoneman Douglas, seventeen people were killed while Marshall County lost only two; fourteen others got shot, but only two people died.  This is a massive failure on CNN, Fox News, MSNBC, the whole lot of them, who would rather saturate our ears with redundant Stormy Daniels coverage than bring us information about how a school in Kentucky was terrorized by a wayward student with a gun.  How is it that the murder of two students during a shooting rampage in an American high school was not newsworthy?

I think the parents of Bailey Holt and Preston Cope would disagree.

Second, this is not a uniquely American problem.  It seems every time someone goes on a rampage, a mass of idiots post comments about how you never hear about this kind of thing happening in other countries.  Ironically, this person is using the internet to make this post, when they could easily open another tab and look it up to see just how wrong that is.  In 2009 Southwest Germany, a former student killed fifteen people and wounded nine others before turning the gun on himself, and that wasn’t even the first mass school shooting in Germany that decade.  Twelve children were massacred at a school in Rio De Janeiro in 2011, the same year 77 young people were massacred in Norway.

That being said, just going down the list, it’s clear that the vast majority of mass shootings do happen in the United States.  It would appear, and again I haven’t done any statistics on this, that at least twice as many mass shootings happen in the US than the rest of the world combined.

We also have far more guns than the rest of the world combined.

Third, the guns do matter, but not as much as you might think.  There have been calls for an ‘assault weapons ban’ though no one is quite sure what an assault weapon is.  There have also been calls for a bump stock ban, though the market for rapid-fire mechanisms evolves much faster than congress can legislate.  Just browsing through the list, it appears that a vast majority of mass shootings are perpetrated with a handgun that has the same semi-automatic capabilities as the notorious AR-15.  While the VA Tech Massacre saw 33 fatalities, all from handguns, this is anomalous.  Usually, the handgun fatalities stay in the single digits.  Rifles, when they are used, can bring down as many as 30, 40, 50 people at Pulse Nightclub, 60 people in Vegas, more than seventy people killed in Norway.  The seventeen people murdered in Parkland is a low number for rifle attacks.

The AR-15 achieves its killing power using physics.  The projectile of its native .223 is actually about half the diameter of a 9mm handgun, so it’s a much smaller bullet.  But because of the amount of powder behind it and the length of the barrel, it exits the gun at about three times as fast.  Because of the increase in velocity, the impact force is going to cause significantly more damage, making it less likely to survive.  A survey of ER doctors and first responders, when given a choice between getting shot with an AR-15 vs a 9mm handgun, almost all would choose to not get shot at all.  Furthermore, the way the rifle is designed to reduce recoil makes it ergonomically possible to spray more bullets into a crowd of children in a shorter period of time.  That, and a typical handgun can hold 10-15 bullets per magazine depending on state laws, whereas the AR-15’s stock magazine holds 30 bullets, with mods capable of holding 40, 50, as much as 100 rounds of ammunition, meaning it’s capable of inflicting far more damage between reloads.

The handgun is most often used because it’s easier to conceal and therefore sneak into a classroom, but the number of fatalities usually isn’t more than five or six.  The semi-automatic rifle, on the other hand, will reliably achieve upwards of twenty or more.

Four.  These things are not random.  Shooting after shooting after shooting, one gets the sense that this is a case of some psycho who just flips one day and goes on a rampage.  And for us watching the news, it seems completely random.  But when you comb through the evidence, read the reports from investigators, and put the pieces together, there are ALWAYS warning signs.  These signs get ignored, and that’s how the shooting happens.  Often, the pre-perpetrator is singled out by a teacher or some other individual who contacts the police about his erratic behavior, and is then told “there’s nothing we can do about it.”  No victim, no crime.  The idea of preventative justice is non-existent.  Read about the information that came up during the Pulse Nightclub shooter’s background check; there’s no way in hell that person should have passed given the information provided to the background checkers, and yet they passed him.  The Stoneman Douglas shooter had videos of him being bullied and humiliated by classmates, and himself posted videos of himself with guns making threats.  One of his classmates even pointed him out, saying, “he’s going to be a school shooter.”  The Sutherland Springs shooter had a litany of charges going back years, and was even court-marshalled for his violent and erratic behavior.  The red flags are at full mast, and these people often cry out for help.  But instead of getting the help they need, they’re allowed to buy the guns they need.

If we’re going to solve this pandemic of mass shootings, we need to address the way we deal with people.  An ‘assault weapons’ ban may help to reduce the number of fatalities when these things happen, and more restrictive gun control might reduce the frequency of these things, but that doesn’t change it from a comprehensive problem that needs a comprehensive solution.  Just look at China — they don’t have mass shootings because guns are banned.  What they do have is mass stabbings, and some of these stabbings can get horrible;  nine people were killed at a middle school in Shaanxi province just last week.  The perpetrator told the police he’d been bullied at that school.

The guns do matter.  But so does the way we treat one another.  Bullying and social aggression seems to be implicated in more school shootings than most would care to admit.  Read through the articles, study the reports, and it appears that more often than not the students being attacked in these shootings aren’t random, either.  The Columbine shooters famously taunted their victims, saying they wanted all the ‘jocks’ to come forward and selectively killed peers who they saw as part of the jock culture.  At Stoneman Douglas, the shooter targeted few, specific classrooms.

It also matters how we handle people who show these red flags.  It’s a difficult conundrum.  The way criminal injustice works in the US, there’s hard prison time and there’s civilian life.  There isn’t much in-between.  There are mental institutions, but these provide little more than pills and they won’t help if you don’t have the money.  To compound matters, these kinds of things still show up on a person’s background years later, which can make it difficult to get a decent job, which can exacerbate the emotional stress that leads one to massacre a bunch of people.  So there are very real consequences for taking a person into custody based on “maybe they might do something.”

I don’t know what the solution would look like.  All I know is we to do something.

Michael Patrick Lewis is a teacher, gun-control advocate, and bestselling author of Edge Of God and Preferred Rewards.  You can also find him on Twitter @fakeMikeLewis.