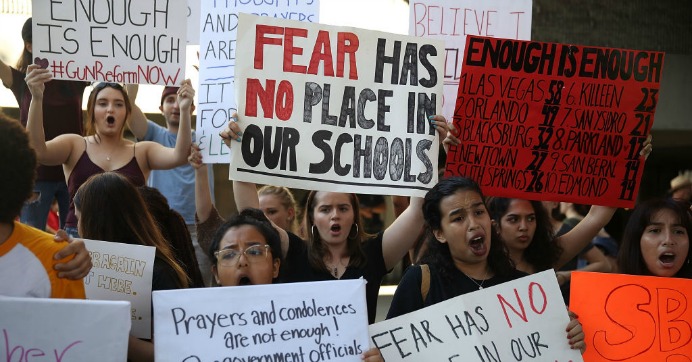 Stop compromising on gun control. Stop listening to excuses. We will win.

Asking legislators to enact ‘better’ gun laws won’t do any good; we need to know what we’re asking for.  Here’s a list we can give them:

This may seem as though we’re asking for guns to have the same degree of licensure as motor vehicles, which is admittedly odd.  After all, a car or truck in the wrong hands hurt a lot of people, cars don’t mix well with alcohol, and a car accident can be fatal.  A gun, by contrast, is a deadly weapon.

But the 2nd amendment guarantees the right to bear arms.

Here’s what the second amendment says:


A well-regulated militia, being necessary to the security of a free state, the right of the people to keep and bear arms, shall not be infringed.

Personally, I’m unsure how unrestricted access to any kind of firearm to anyone and everyone who wishes to have one for any reason under the sun regardless of any disturbing behavior constitutes being ‘well-regulated.’  Furthermore, that one can’t go to a nightclub or a concert or church or school without getting shot by some random psycho doesn’t exactly spell ‘security of a free state.’

We should arm teachers instead, and schools need to be more secure.

These are great ideas; if only we had a concrete wall around those schools in Las Vegas, San Bernardino, or Sutherland Springs, topped with razor wire and armed teachers in the guard towers.  That would have made such a difference.

That’s true; people kill people.  With guns.  In fact, guns don’t kill people in the same way that statistics don’t lie.  Did you know that 95% of all statistics are made up?

Because we tried that already, and it clearly didn’t work.  Australia tried that too, back in 1996, and they’ve had so many mass shootings since.  No.  Sarcasm aside, we haven’t tried anything because the terrorist NRA goes out of their way to block every attempt.

If that’s true, then why did the Republican congress make it easier for people with mental health issues to buy guns?  Second, this is not reflected in the facts as people with mental illness are twice as likely to be the victims of violence than perpetrators.  Third, a lot of the shooters don’t exhibit signs of any mental illness, neither are they diagnosed with anything.

We should improve the background checks system in place.

Agreed, and that’s on the menu.  But if Sutherland Springs teaches us anything, it’s that no background check system is perfect.  Just look up Omar Mateen’s background and ask if this person should have been allowed access to a gun.  We also need outright restrictions on weapons.

So did Australia.  So did Britain.  Also Argentina, South Africa, Brazil, India, the fascist dictatorship of Japan, Israel, France, Indonesia, Kenya, Chile, poverty-stricken violent Kuwait, South Korea (the brutal Korea led by that evil narcissist), Iceland, that shithole country Norway, Denmark, Germany, Greece, Sweden, New Zealand, and a host of other genocidal, authoritarian regimes.  Millions upon millions of people have been murdered in each of these countries ever since they instituted gun restrictions, so we have every reason to be afraid.

Knives are deadly, too.

Between 1996 and 2014, in China, there were 86 fatalities in 18 school knife attacks, and not one, single shooting.  During the same time in the US, there were 174 fatalities in 27 school gun attacks.  Accounting for the fact that the population of China is four times that of the US, gun attacks on schools are ten times more common and 33% more lethal.  It’s much easier to attack a school with a gun than with a knife, and the number of fatalities is much higher.

You can run from a knife.

But guns are already on the market; restricting sales won’t do anything.

The problem is our violent culture and video games.  We just need to be nicer to each other.

Human beings have been violent to one another for at least 200,000 years.  In the Bible, the Cain murdered his brother Abel, and these were (according to the bible) the first human children ever born.  If we plan to wait until people start loving one another before we institute sensible gun laws, we’re going to wait a very, very long time.