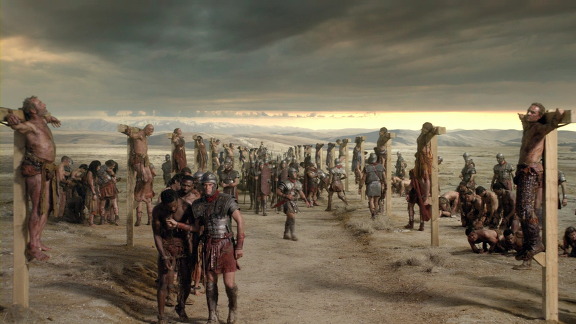 Until the members of our glorious Congress get of their fat asses and enact meaninfgul legislation, we ought to take a page from our barbaric past.

We should crucify Nikolas Cruz.

While crucifixion existed long before Ancient Rome, it was the Romans who made it popular; they used it as a deterrent.  In theory, if you make the punishment for a crime so severe, so gruesome, so utterly humiliating, so excruciating that anyone who witnessed it would forever have that memory etched into their minds, they would think twice before committing the same crime.

There are basically two schools of thought when it comes to criminal justice: corrective, and punitive.  The corrective approach seeks to reform the criminal, to teach them better ways to live and produce within a society, and gives opportunities to succeed.  Many of the more sophisticated countries of the world use this approach because it reduces repeat offense rates.  We don’t do that here in the United States.

We have a bizarre relationship with punitive measures in this country.  We must punish the wrongdoer but we can’t do it in any way that’s cruel or unusual or strips away their dignity or anything public or anything that would otherwise provide a valid reason for using a punitive approach in the first place.  Or, to flip that coin around, we’re ripe for something drastic.  If we were in a state of having grown accustomed to seeing violent justice, extreme punitive measures would be ineffective, but we’re not.  Right now, capital punishment mostly consists of sterile, peaceful, lethal injection.  As it sits, something so hideous as a public crucifixion would be quite a deterrent.

Take Nikolas Cruz, the kid who massacred seventeen kids at Stoneman Douglas High School last week.  Like Adam Lanza, he was obsessed with the idea of being a school shooter.  I don’t doubt he’d seen the articles, the coverage, the fame, and in his own sick mind, the glory.  And there’s probably someone else out there right now seeing how this kid shot and killed seventeen of his former classmates and teachers, sees the impact he had on the world, and aspires to do the same.  To get the same glory.

I say we put a different image into his mind.  And this is the 21st century, we can modernize the thing; livestream it from start to finish.  Let’s take Nikolas Cruz and lay him down on an assembly of 4x4s, and I can see a “Lumber provided by Home Depot” product placement in there.  Then, show him a nice, 12” galvanized nail and let him squirm a little.  We’d need a dedicated cameraman to get a good close-up of him looking at the nail wide-eyed.  I’d swab his wrist with alcohol just for kicks, then let him watch as I take a mallet and tap that sucker straight through the meat.  That might hurt a little, so I’d let him scream in agony, and remember this is all streamed live so the whole could savor it.

I’d have a little trouble driving the nail, and it’s a pretty thick nail so I’m afraid it’s going to split the wood.  So with a crowbar, I gently pry it loose so as not to bend it, and let the kid dwell on that while I get the drill to make a pilot hole.  Then, with the first nail hammered securely through, I’d stretch out his other arm and drive that one, too.  I don’t think we have to be too careful to stretch him out all the way, as the weight of his body on the wound is likely to tear the flesh some as he slumps down, so he’s going to be a little slack either way.

Now I’ve done some research, and if we don’t support his feet, he’s Likely to suffocate within minutes after being hoisted up as his body weight would collapse his lungs.  I’m not sure the physics of this but that’s what it says on Wikipedia.  Since we want this to last, I’d drive another pair of nails through each foot, right through the bones of his heels, making sure to bend his knees at a sharp angle.  Then I’d show him one of those charts nurses use and ask, “how would you rate your pain, from one to ten?”  Just to #@&$ with him.

Just before dawn, I would take him out to the everglades where there are plenty of mosquitoes and hoist him up, being sure to place him over the water; in the event he frees his hands he’d dangle by his feet and feed the alligators.  Then, we all get to watch as the Florida sun bakes his naked body throughout the day.  I wonder if there’s a way to set it up so that if there’s a parental control on the client side it would automatically blur out his genitals?  Also, being as this is a modern crucifixion, I’d hook him up to a heart monitor and feed that along with the video.  In order to breathe out, he’d have to support his weight on the nails driven through his heels.  And if that gets to breathe in, he’d have to support himself on the nails driven through his wrists, all while the sweat dribbles down his sunburnt body.

While the pain of having one’s extremities impaled is bad enough, the true torture of crucifixion is in the hours.  Hour after hour after hour of the man shrieking with pain as he has to constantly shift his weight just to breathe all while the merciless sun beats him to a delirium.  I imagine sometime around noon he’d start to get delirious and moan about the agony and start begging someone to just kill him.  But all I’d do is just leave him up there until the vultures pick him clean.

I don’t know, but I wonder if that was the image of Nikolas Cruz people remember, there might be a slight reduction in school shootings for a while.  Besides, it’s not like congress is going to do anything.