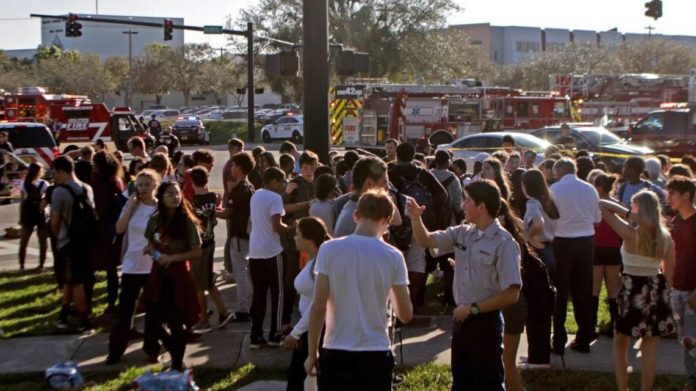 I want Donald Trump to come here; I hope he does. I want him to visit Stoneman Douglas High School and walk the grounds. See the bullet casings lying on the floor. Talk to the parents who lost sons and daughters.

This is a response to Broward County vice mayor Mark Bogen saying he doesn’t want President Oompa Loompa to come here to speak with the families who lost kids at Marjory Stoneman Douglas High School.

I live in Coral Springs.  Stoneman Douglas is not far from my house, and I drive by it every now and then while I’m out.  I interviewed there about two years ago; it was one of my preferred locations.  I thought I did very well, but they didn’t want to hire me for some reason.

Now a few things about Parkland.  It’s basically a thin strip of a suburb taped onto the north side of Coral Springs, reserved mostly for rich white people.  While Broward County as a whole is pretty blue, the bluest county in Florida if I’m not mistaken, Parkland is decidedly red.  Coral Springs can look a little purple sometimes, but Parkland is most definitely red.

It stands to reason that some of the families who lost people are, or at least were, Trump voters.  As such, it’s not fair to deprive these families an opportunity to hear some kind words from the President.  And if that fat pig wants to come down here to offer his condolences face-to-face, as in, actually do his job for once, I applaud him for it.

But more than that.  If it were my son, and with a quick ten minute drive it could have been, I would want to speak with the president.  Even this president.  I would welcome the chance to sit down with the man and show him some videos of my son, let him hear his voice, see pictures of the cars he draws, describe in detail how he tinkers with all manner of random things to come up with the most crazy inventions.  And then, I would look Donald Trump in the eye and ask him, “why did you sign legislation that made it easier for mentally deranged people to buy firearms?”  Then, I would want to know, “why is it that you can be so focused on protecting people from Mexico and Muslim countries while over the past year you have done absolutely nothing to curb these rampage killings, which are actually real threats?”  And finally, I would ask, “do you have anything to offer besides thoughts and prayers?”

Mark Bogen, I want Donald Trump to come here; I hope he does.  I want him to visit Stoneman Douglas High School and walk the grounds.  See the bullet casings lying on the floor.  Talk to the parents who lost sons and daughters.  Listen to the survivors who got missed.  Hear it from the mouths of those who lost friends, brothers, sisters, students, teachers.  See the vigil.  And I fucking hope he feels it.