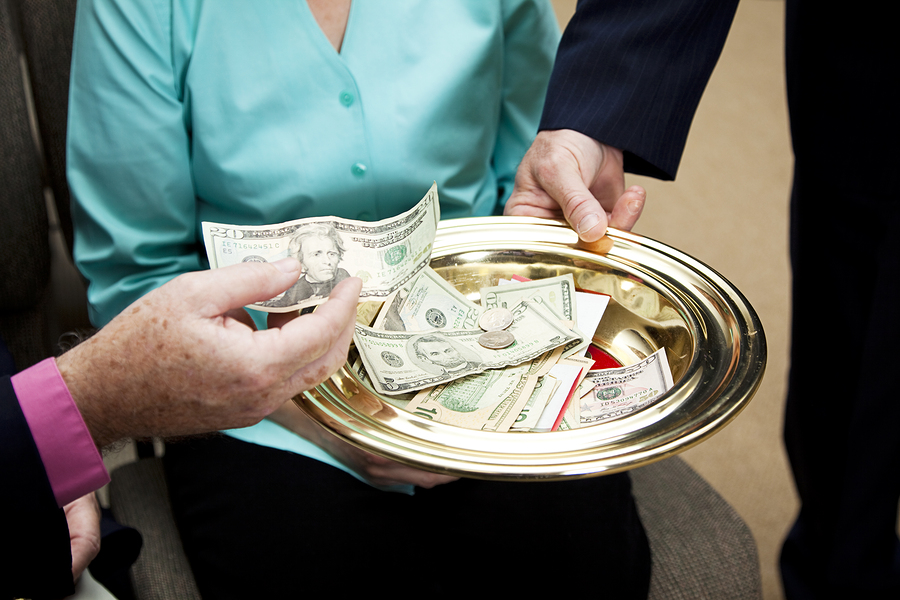 ... just know that there is a difference between giving to the church and giving to God. A big difference.

There was a sermon by my church’s main pastor about two weeks ago on the subject of tithing.  It’s not a bad lesson, I think, here it is, though there is one thing I’d like to add.

It’s a sensitive topic for any legitimate pastor, to be sure, considering the sheer volume of filth being spewed out by some others.  And if you’ve ever been in church where they pass the plate around you’ve felt that pressure.  I recall one time, I’ll never forget, having been invited to a service by a girl I was seeing where the pastor spoke of putting a ‘faith pledge’ on the envelope and told stories of how some people couldn’t figure out where to come up with the money and prayed about it, only to miraculously come into the money so they could give it to the church.  He went on to say my favorite line, “if you don’t put a number there, I don’t know how you can call yourself a Christian.”

There exists also this thing called the gospel of wealth.  The way it works is this: you quote the scripture where it says something like give and it shall be given unto you and you use that to convince people that if they send you money, they’ll get rich.  Some call it a faith seed.  Jon Oliver tackled some of these televangelists with this segment not too long ago.  The reality is that you’re duping people who haven’t read the Bible much into giving you their money on the idea that buying you a new car is a sound investment for them.

A few years ago, I sat down with a young man who’d fallen into such a scam.  He told me he would send these people money, and they would respond by telling him how money was in his future, and so he would keep sending them money and so forth.  When I told him he was talking to a false prophet, he had trouble wrapping his head around it.

And so, we come to the matter of the tithe.  Apparently, and I could be wrong about this, tithe comes from the Olde English word meaning tenth, as in you’re supposed to give one tenth of your income to the church.

And that’s not in the Bible.  Not exactly, anyway.

To be sure, the Bible does talk about giving to God, and Pastor David gives a great example using the French fries.  But what’s important to remember is that God is everywhere and in all things, and giving to God doesn’t necessarily mean giving to the church.  These are two separate things.

When I read the Bible, I get a different lesson than the one that says “shave off ten per cent of your income and give it to the church.”  What I get is more along the lines of having an attitude of generosity.  Jesus often spoke of rules and laws in terms of humanity not being bound by external restrictions, but rather living one’s life with love in such a way that the rules and laws become unnecessary and obsolete.  And the concept of a tithe goes against what Jesus taught in that regard.  Suppose you find someone on the street, their car broke down because they ran out of gas.  Since I give my ten per cent to the church, I don’t need to be generous elsewhere; I already gave to God.  Chances are I didn’t even notice that stalled car by the side of the road and just went on my day merrily — oblivious to the opportunity to be generous I missed.

Because I followed the law, I missed the point of the law.

Don’t mistake me.  It’s good to give to the church; that’s how the church pays its bills.  And without the ten per cent rule a lot of people wouldn’t give at all.  But it is important to understand the difference between giving to the church, and giving to God.

Giving to God is, in my opinion, having an attitude of generosity and looking out for others, and that’s the part of giving Jesus talked about.  It doesn’t always mean money, either, not necessarily in what you sow, neither in what you reap.  You could sow money and reap something else entirely knowing that whatever it is, it will be worth so much more than you started out with — A good measure, pressed down, shaken together and running over.