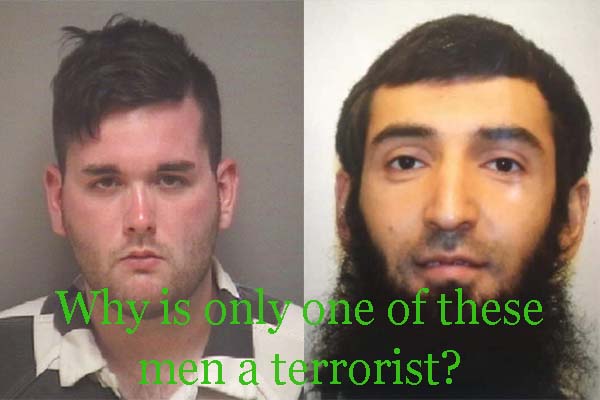 Sayfullo Saipov is a terrorist threatened with the death sentence and time in Guantanamo, while James Alex Fields is charged with malicious wounding.

I guess we forgot already.

Just the other day, a terrorist drove a truck through a bicycle path in New York, killing some and injuring others.  And it seems this is the new thing — mowing down people with a vehicle.  If you watch or read the news, they’ll remind you of the myriad of vehicle attacks in recent years, from the Bastille Day massacre in Marseilles, Barcelona, London, and now New York City.  I found this list on CNN, but you can go to a number of news outlets to get a list of killers who’ve plowed through throngs of people in the name of their cause.

And if you pay close attention, you might notice one particular incident missing.  It’s odd, to me.  Just this summer, a terrorist drove through some people and that particular one doesn’t seem to appear on any list.

And this puzzles me because it was a terrorist attack, people were seriously hurt or killed, and it did involve a vehicle being driven by an extremist.  So why doesn’t that one count?

Or why is it that when we list out atrocities committed by extremist groups, fringe elements, we keep silent when that group consists of white US citizens?

Or why is it that we can so quickly find ways to shut out other fringe groups from our borders, talk of sending them back from whence they came, and be so silent with this particular fringe group?

Do they not preach violent extremism and deal in terror?

Already we have calls for more extreme vetting of violent extremists coming from other countries, but for some reason we seem to have forgotten that a significant majority of terrorist attacks in the United States are carried out by US citizens, natural born.  You hear outrage from the news about all the ‘Muslim terrorists’ and ‘Islamic terrorists,’ and people yammer on about how we can prevent this kind of murder, but whenever one of these ‘Christian terrorists’ does some murder, we’re all quick to dismiss it.  Here is a chilling write-up of some of the terrorist attacks carried out by white supremacists this year alone.

Why is it that hate and terror by one band of extremists is so derided while the same of another group is largely ignored and forgotten?  Is it because there are our terrorists murdering us as opposed to those other people’s terrorists?  What have they done to earn such affection?  Saipullo Saipov earns front-page news on every outlet and tweets from our Fearless Leader calling for the death sentence and threatening to send him to Guantanamo.  Meanwhile, James Alex Fields gets charged with a handful of crimes like ‘malicious wounding,’ and isn’t even called a ‘terrorist.’