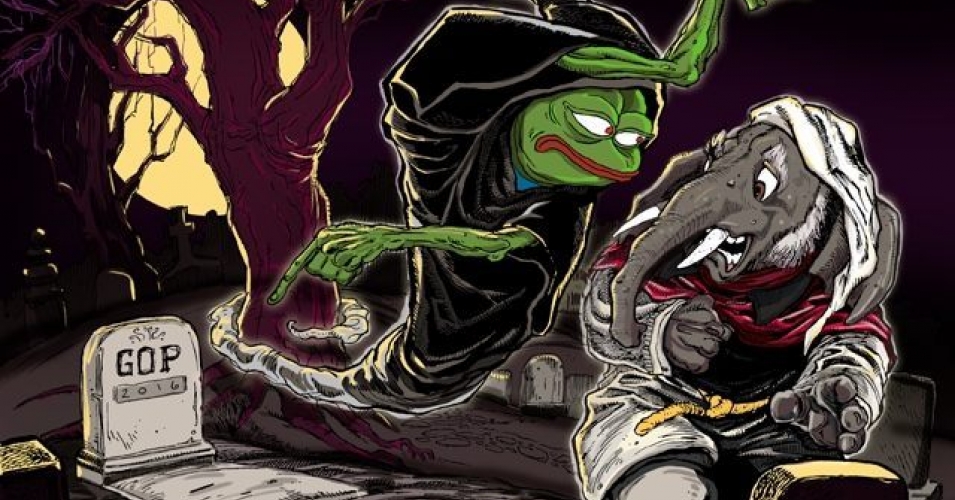 Imagine a horror movie with a bunch of kids who decide one day to summon a demonic monster from hell… just because it sounds like fun.

Imagine one of those horror movies that starts off with a bunch of kids who decide one day they’re going to summon a demonic monster from hell… just because it sounds like a fun adventure. They’re not really Satanists; they just don’t have a fucking clue what they’re dealing with.

This is the ‘movement’ that propelled Trump to victory, by the way. In case you missed it. I had to look them up, and of course, while everyone else will tell you they’re neo-nazi racist white supremacists, they’re not.

The first thing they tell you (after disavowing racism) is that they’re intelligent. This is what differentiates them from racists, which are not. So here’s your first red flag: the very act of claiming intelligence is an act of idiocy. The moment you think you know, you’ve lost the ability to learn, and we humans are nothing if not lacking in total perspective. So to believe in the adequacy of one’s own perspective and intellect makes one blind to the truth, whatever that truth may be.

The next thing this alt right stands for is being gratuitously anti-politically-correct. It’s the idea that we should all say things for shock value, just because it’s an offensive thing to say… which includes racially sensitive things. It’s a revulsion of censoring oneself for the benefit of others’ feelings. Here’s the next flag: saying things to piss people off just because it pisses people off isn’t a political movement; it’s just being an asshole. Of course, the rationale behind this is this idea that we should say what we think, that such truthful thoughts are better than thoughtful consideration because it opens up a dialogue. For example: you might think, Muslims need to report on the bad elements among them, and well, this seems to make sense. So people believe it. Ideally, open dialogue should lead to a sharing of ideas such that we all become more enlightened. The problem with this is that you’re intelligent, with a high IQ to prove it, and so you know you’re right; your perspective is already adequate. There’s no need to examine that statement to see what’s wrong with it.

The third element of the alt-right, is this notion of tribalism that comes with the idea of a ‘natural conservative.’ There is an over-arching need to put people into categories. Black people are better off with black people , whites with whites together celebrating their white culture, and so on. Once you have everyone put neatly into their respective groups, there’s no more need to think critically about the actions of one individual because those actions can be defined as being characteristic of the group. If some Mexicans are rapists, then Mexicans are rapists. There’s that high IQ at work again.

Remember that by the alt right’s own admission, racists are stupid.

It is important to remember, however, that not all Alt Right people are the same, so you can’t make generalizations like that. And don’t call them racists, either; that’s offensive.

Michael Patrick Lewis is a teacher, and bestselling author of Edge Of God, and Preferred Rewards. He, too, is not a racist.